I like to think of myself as a very passive version of Indiana Jones, the globetrotting archaeologist and adventurer played so brilliantly by Harrison Ford in the film series. In real life, a writer's life isn’t nearly as thrilling as Dr. Henry Jones fighting Nazis and rescuing priceless treasures. In fact it’s pretty boring on the thrill-o-meter, but when it comes to unearthing awesome historical details, writers are in a league of their own. 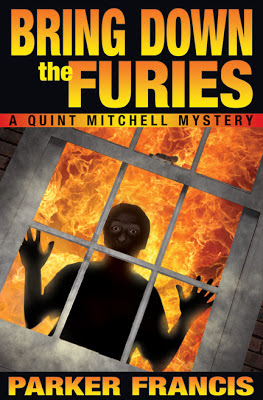 The key to writing a credible novel filled with fascinating tidbits—both true and nearly true—is research. And it’s amazing what I’ve learned while researching my books. MATANZAS BAY, my first Quint Mitchell Mystery, was set in St. Augustine. I thought I knew the nation’s oldest city fairly well since I live nearby and have visited dozens of times. But while researching this story in which Quint, a private detective with an anguished past and an interest in archaeology, digs up the vice mayor’s body, I learned that the settlement of St. Augustine was literally birthed in blood. It seems the Spanish settlers were a vengeful sort and when they located several hundred shipwrecked Frenchmen who were caught in a hurricane near present day St. Augustine, they ferried them ashore from the sandbar where they found them and proceeded to put them all to the sword. Hence the name Matanzas, which is Spanish for “place of slaughter.”

I had to do even more research for my recently released mystery, BRING DOWN THE FURIES, since it wouldn’t be located in Florida. I wanted find a setting where archaeology might play a small part in a larger mystery, as it did in the first offering. Searching the Internet, I found the Topper site outside Allendale, South Carolina where they’ve discovered artifacts made by the pre-Clovis people dating back thousands of years. Claxons began ringing in my head, and I asked myself what if a Creationist minister feuded with the archaeologist and it boiled over into a tension-packed media circus. Now I felt I was onto something that could explode from a single idea into a longer, more compelling narrative.

With more research I learned that General Sherman’s troops had burned down the original town of Allendale during the Civil War. This bit of historical news tripped another set of creative neurons and I decided fire would play a major role in the story. That led to the idea of a serial arsonist at work in Allendale.

But a writer can get lost in the research if he’s not careful, and there’s always much more fascinating trivia then we can use. For example, in researching General Sherman, I discovered he was actually living in the South when the Civil War broke out acting as superintendent of the Louisiana Seminary and Military Academy, which later became LSU. The Allendale Courthouse plays a major role in the climactic scene of FURIES, and my research told me that an arsonist tried to burn down the courthouse in 1998. Of course, I used that in the book. <\p>

While I may think of myself as a desk-riding Indiana Jones because of the research I’d done, the real excitement came in the story. BRING DOWN THE FURIES is a fast-paced romp through the old south complete with arson, murder and compelling characters. Some of my early readers have been very kind. Bestselling thriller author Steve Berry had this to say, "Another terrific outing for Parker Francis, who definitely delivers what readers want. He's a powerhouse storyteller and a welcome addition to the thriller genre. Hang on tight and remember to breathe."

BRING DOWN THE FURIES Blurb


Sherman’s troops burned it the first time. Now a serial arsonist threatens a small South Carolina town and private investigator Quint Mitchell is caught in the backdraft. When Quint follows the “Heartthrob Bandit” to the hamlet of Allendale, he finds himself in the crossfire of an ugly cultural war between an ultraconservative minister and the scientist who may have discovered proof of the oldest humans ever found in North America.

As the heat grows more intense, arson turns to murder, and Quint is embroiled in a growing firestorm that threatens to destroy Allendale for the second time. A media frenzy surrounding the clash of faith and science whips emotions to a fiery crescendo. With time running out, Quint is the only man standing between a vicious killer with nothing to lose and his plan to bring down the furies on Allendale and Quint.

Parker Francis writes gritty, fast-paced mysteries filled with murder and violence, but laced with humor and emotion. Parker’s career was in broadcasting and special events where he his diverse duties included public affairs producer, director, reporter, fundraiser and producer of the Jacksonville Jazz Festival. He wrote an award-winning trilogy of adventure/fantasies with a feline protagonist under his given name, Victor DiGenti, prior to taking on the mantle of mystery writer and the Parker Francis pen name. The WINDRUSHER trilogy won multiple awards and attracted readers of all ages. Parker (aka Vic) lives in Florida with his wife and their rescued cats who tolerate them as long as their bowls are filled and litter boxes emptied.

Posted by Chris Redding at 3:02 AM