From the Creator of Jak and Daxter: Untimed

My mother loves me and all, it’s just that she can’t remember my name.

“Call him Charlie,” is written on yellow Post-its all over our house.

“Just a family joke,” Mom tells the rare friend who drops by and bothers to inquire. 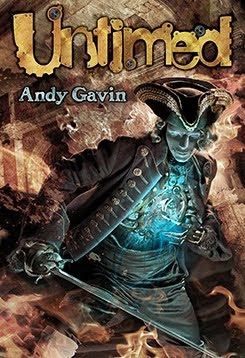 But it isn’t funny. And those house guests are more likely to notice the neon paper squares than they are me.

“He’s getting so tall. What was his name again?”

I always remind them. Not that it helps.

Only Dad remembers, and Aunt Sophie, but they’re gone more often than not — months at a stretch.

This time, when my dad returns he brings a ginormous stack of history books.

“Read these.” The muted bulbs in the living room sharpen the shadows on his pale face, making him stand out like a cartoon in a live-action film. “You have to keep your facts straight.”

I peruse the titles: Gibbon’s Decline and Fall of the Roman Empire Asprey’s The Rise of Napoleon Bonaparte, Ben Franklin’s Autobiography. Just three among many.

“Listen to him, Charlie,” Aunt Sophie says. “You’ll be glad you did.” She brushes out her shining tresses. Dad’s sister always has a glow about her.

Dad’s supposed to be this hotshot political historian. He reads and writes a lot, but I’ve never seen his name in print.

Dad frowns. “We dropped in on someone important.”

When he says dropped in, I imagine Sophie dressed like Lara Croft, parachuting into Baghdad.

“Is that where you got the new scar?” A pink welt snakes from the bridge of her nose to the corner of her mouth. She looks older than I remember — they both do.

“An argument with a rival… researcher.” My aunt winds the old mantel clock, the one that belonged to her mom, my grandmother. Then tosses the key to my dad, who fumbles and drops it.

“You need to tell him soon,” she says.

Tell me what? I hate this.

Dad looks away. “We’ll come back for his birthday.”


Charlie’s the kind of boy that no one notices. Hell, even his own mother can’t remember his name. And girls? The invisible man gets more dates.

As if that weren’t enough, when a mysterious clockwork man tries to kill him in modern day Philadelphia, and they tumble through a hole into 1725 London, Charlie realizes even the laws of time don’t take him seriously.

Still, this isn’t all bad. In fact, there’s this girl, another time traveler, who not only remembers his name, but might even like him! Unfortunately, Yvaine carries more than her share of baggage: like a baby boy and at least two ex-boyfriends! One’s famous, the other’s murderous, and Charlie doesn’t know who is the bigger problem.

When one kills the other — and the other is nineteen year-old Ben Franklin — things get really crazy. Can their relationship survive? Can the future? Charlie and Yvaine are time travelers, they can fix this — theoretically — but the rules are complicated and the stakes are history as we know it.


Andy Gavin is a serial creative, polymath, novelist, entrepreneur, computer programmer, author, foodie, and video game creator. He co-founded video game developer Naughty Dog and co-created Crash Bandicoot and Jak & Daxter. He started numerous companies, has been lead programmer on video games that have sold more than forty million copies, and has written two novels including The Darkening Dream, a dark historical fantasy that puts the bite back in vampires.

Posted by Chris Redding at 3:05 AM