From The Samurai's Garden by Patricia Kiyono


"I hoped Sato-san would sell me the animals and let me make payments later." Her embarrassment turned to anger as Hiro burst into laughter. "What’s so funny? Do you doubt my ability to work the farm and turn a profit?"

"I don’t doubt your ability at all. But I can just imagine what kind of payment that vermin would want from you," he rasped. "I heard some of the things he said." He took her arm as she turned away. "If you don’t have the money, then perhaps you could give me a place to stay for a while. The inn here is full, and there are no other accommodations in town. I’ve been traveling a long time and I’m tired."

Hanako looked closely at the stranger. Her sharp eyes took in the rich fabric of his obi, the fine craftsmanship and fit of his clothing, and the bejeweled hilts on both his long and short sword. "I can’t offer fine accommodations like you are accustomed to having." Her eyes narrowed as another thought occurred to her. "And why should I believe you would not expect the same payment as you suspect Sato-san wanted?"

Hiro drew himself up. "I have taken the oath of the Bushido. You are not an enemy, so I would not harm you or anything that is yours."

It was Hanako’s turn to laugh. "It was a band of your honorable men who came and raided my home, killed my husband, and burned my crops last fall. I do not have much faith in your code."

At the mention of the masterless samurai known as ronin, Hiro's lips curled in disgust. Though many former samurai had taken positions in the Emperor's army or had found new careers, a few wandered the country aimlessly, causing havoc. Now, Hanako wondered if her insult had pushed the stranger too far. If he chose to punish her for speaking to him so, she would have no defense against his strength. She watched his expression, wondering if she should try to run. Finally, he bowed stiffly and spoke. Hanako braced herself for the worst. But her jaw dropped in surprise at his words.

"I apologize for the actions of my fellow samurai," he began, "and you may consider the animals partial payment toward retribution for your loss. In addition, I will work for you this season so your lands may be restored to their former value."


Hiro Tanaka prepared for a life as a samurai warrior. But his world changed when Japan's feudal system was abolished by the Emperor. Now, he must find a new vocation. Disillusioned with fighting and violence, he travels alone, going north to the island of Hokkaido. Many other samurai wander through the country and are known as ronin. Some have forsaken their honorable way to prey on the less fortunate.

Hanako Shimizu experienced first-hand the devastation caused by these disreputable wanderers. The previous winter, they raided her farm and killed her husband. Now, she needs to rebuild but has no money and no prospects -- except for the dubious intentions of the town merchant.

When Hiro, tired of his wandering, encounters Hanako in the market, arguing with the merchant, he poses as her late husband’s cousin then offers to help her on the farm in exchange for a place to stay. Working on the land, Hiro finally finds the peace he has been seeking. But the reappearance of the rogue ronin, led by an unscrupulous leader from Hiro’s past, forces him to take up his swords again. But now, the stakes are higher.

This time, he's fighting from the heart. 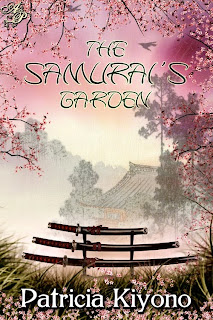 She lives in southwest Michigan with her husband, not far from her children and grandchildren. Current interests, aside from writing, include sewing, crocheting, scrapbooking, and music. A love of travel and an interest in faraway people inspires her to create stories about different cultures.

Posted by Chris Redding at 4:34 AM