The Darkening Dream is the chilling new dark fantasy novel by Andy Gavin, creator of Crash Bandicoot and Jak & Daxter.

Even as the modern world pushes the supernatural aside in favor of science and steel, the old ways remain. God, demon, monster, and sorcerer alike plot to regain what was theirs. 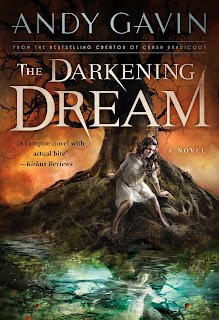 1913, Salem, Massachusetts - Sarah Engelmann's life is full of friends, books, and avoiding the pressure to choose a husband, until an ominous vision and the haunting call of an otherworldly trumpet shake her. When she stumbles across a gruesome corpse, she fears that her vision was more of a premonition. And when she sees the murdered boy moving through the crowd at an amusement park, Sarah is thrust into a dark battle she does not understand. With the help of Alex, a Greek immigrant who knows a startling amount about the undead, Sarah sets out to uncover the truth. Their quest takes them to the factory mills of Salem, on a midnight boat ride to spy on an eerie coastal lair, and back, unexpectedly, to their own homes. What can Alex's elderly, vampire-hunting grandfather and Sarah's own rabbi father tell them? And what do Sarah's continuing visions reveal? No less than Gabriel's Trumpet, the tool that will announce the End of Days, is at stake, and the forces that have banded to recover it include a 900 year-old vampire, a trio of disgruntled Egyptian gods, and a demon-loving Puritan minister. At the center of this swirling cast is Sarah, who must fight a millennia-old battle against unspeakable forces, knowing the ultimate prize might be herself.

"This book will satisfy any fan of the vampire genre and then some!" -- Must Read Faster

"In a similar vein to George R.R. Martin's writing style, Gavin often dangles his characters in the maws of danger and doesn't shy away from ... their blood being spilled." -- Andrew Reiner, executive editor of Game Informer magazine

"Now this is a vampire novel! It flows so perfectly between character point of views, it's a great blend of historical fiction, mythology and paranormal." -- Little Miss Drama Queen Reviews

"Action-packed and suspenseful, and there were twists all over the place." -- Les Livres

"Andy Gavin has taken a bevy of supernatural elements, compelling characters, and an intricate and superbly developed storyline, and expertly weaved them together to create an original and enthralling book." -- Word Spelunking


Andy Gavin is a serial creative, polymath, novelist, entrepreneur, computer programmer, author, foodie, and video game creator. He co-founded video game developer Naughty Dog and co-created Crash Bandicoot and Jak & Daxter. He started numerous companies, has been lead programmer on video games that have sold more than forty million copies, and has written two novels including The Darkening Dream, a dark historical fantasy that puts the bite back in vampires.

If you cannot use rafflecopter here is a link

Posted by Chris Redding at 3:56 AM