Actually it happened by accident. Growing up I never thought much about writing, but I was an avid reader. The only time I ever wrote was when my teachers at school made me. I wanted to be an NHL superstar…period.

It was the winter of 2000, my second year of professional hockey, and I was playing in Oklahoma City. After sustaining a season ending eye injury (one of the scariest moments of my life), I found myself with time on his hands.

My girlfriend at the time, who is now my wife, was attending a French college in Montreal. She received an English assignment to write a short story, and asked me for some help.

I loved the experience—creating vivid characters and generating a wire-taut plot. I sat down at my roommate’s computer and began typing. I wrote a little every day, around my intense rehabilitation schedule and before I knew it I had completed my first manuscript. 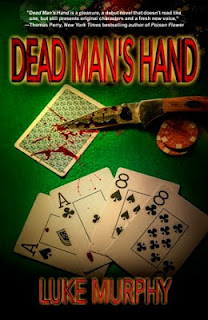 I didn’t write with the intention of being published. I wrote for the love of writing.

Twelve years later, I still write for pleasure—and I still love it! The fact that I am being published is a bonus. 2. How did you pick the genre you write in?

I was always an avid reader. My first books were the Hardy Boys titles, so they are the reason I love mysteries. As an adult, some of my favorite authors are Harlan Coben, Michael Connelly and Greg Iles, so naturally I write what I love to read – mystery/suspense novels.

3. What drew you to the subject of DEAD MAN`S HAND?

There is not a single moment in time when this idea came to be, but circumstances over the years that led to this story: my hockey injuries, frequent visits to Las Vegas, my love of football, crime books and movies.

Dead Man’s Hand became real from mixing these events, taking advantage of experts in their field, and adding my wild imagination. The internet also provides a wealth of information, available at our fingertips with a click of the mouse.

4. What was the best writing advice someone gave you?

“Show, don`t tell.” I was telling too much. The first draft of DEAD MAN`S HAND was over 120,000 words. After working with editors, the final published version was 80,000 words. I did too much “telling” and not enough “showing”. I needed to “trust” my readers more.

5. Why did you pick the publisher that ultimately published your book?

I had met the owner, Cheryl Tardif, years ago. She had been a struggling writer trying to succeed and had gone through the hardships to success. I had researched and found her on the internet and since I was a “newbie”, I bombarded her with questions. She had a lot of knowledge about the industry, was willing to answer my questions, and just seemed like a really nice, genuine person. So when she started up her own publishing company, I contacted her when I had a manuscript ready.

I`m an elementary school teacher by day, but my main job is being a husband and father.

From NFL rising-star prospect to wanted fugitive, Calvin Watters is a sadistic African-American Las Vegas debt-collector framed by a murderer who, like the Vegas Police, finds him to be the perfect fall-guy.

When the brutal slaying of a prominent casino owner is followed by the murder of a well-known bookie, Detective Dale Dayton is thrown into the middle of a highly political case and leads the largest homicide investigation in Vegas in the last twelve years.

Against his superiors and better judgment, Dayton is willing to give Calvin one last chance. To redeem himself, Calvin must prove his innocence by finding the real killer, while avoiding the LVMPD, as well as protect the woman he loves from a professional assassin hired to silence them.

These days I don`t have one. Right now, I have a full time job (teaching), a part-time tutoring job, two small children and another one on the way. I`m too busy playing ring-around-the-rosie and duck-duck-goose to write.

But when I do write, I find that I am most productive in the morning, and I always have to have a mug of steaming coffee in front of me.

Before I even sit down at a computer, I have hand-written notes of ideas for my book. This could be anything from plot, scenes, setting, characters, etc. I always write in the mornings, this is my most productive time.

Once I sit down, I just write. No editing, no looking back, I just let it flow. Unless I`m certain, no title until after I`m done. As I write, I keep notes by hand on the timeline.

Once my first draft is complete, I go through it twice, once for the creative editing process and the next for flow, repetition, etc. Then I have my former English professor read it over and she gives me her thoughts. I edit it myself again. Then I send it to my agent for her thoughts, then I edit it again myself. Only once my agent and I feel ready do we send it to publishers.

10. Who is your favorite character in your book?

Without a doubt, Calvin Watters.

From NFL prospect to wanted fugitive, twenty-seven year old Calvin Watters, a sadistically violent African-American Las Vegas debt-collector, who was once a rising football star, is framed by a murderer who, like the Vegas Police, finds him to be the perfect fall-guy.

He has weaknesses and he has made poor choices. He has regrets, but Watters has the opportunity to redeem himself. Not everyone gets a second chance in life, and he realizes how fortunate he is.

Watters faces racial prejudice with calmness similar to that of Walter Mosley’s character Easy Rawlins. But Watters’ past as an athlete and enforcer will remind other readers of (Jack) Reacher of the Lee Childs series.


Luke Murphy lives in Shawville, Quebec with his wife, two daughters and pug.


From NFL prospect to wanted fugitive, Calvin Watters is a sadistic African-American Las Vegas debt-collector framed by a murderer who, like the Vegas Police, finds him to be the perfect fall-guy.

When the brutal slaying of a prominent casino owner is followed by the murder of a well-known bookie, Detective Dale Dayton is thrown into the middle of the largest homicide investigation in Vegas in twelve years.

Against his superiors and better judgment, Dayton is willing to give Calvin one last chance. To redeem himself, Calvin must prove his innocence by finding the real killer, while avoiding the LVMPD, as well as protect the woman he loves from a professional assassin hired to silence them.

Posted by Chris Redding at 1:48 AM