Tim Forbes was like many Americans: painfully unsatisfied in his corporate job but making too much money to walk away. But then, one momentous day, he and his wife struck the Deal, leading to a career in the one field he loved more than anything: sports. 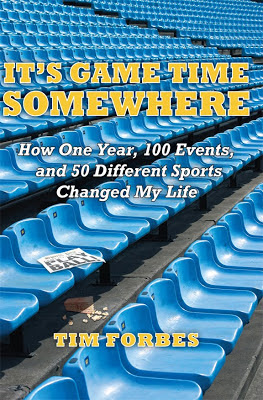 Years later, having carved out his place in the sports business, he was surprised when a friend asked, "Do you still love sports?"...And stunned when he didn't know how to reply. Of course he still loved sports! Didn't he? Was it possible that walking away from a perk-filled Corporate American life had all been for nothing?

His year-long quest to find that answer started with a single game. But what he discovered there soon led to an unlikely coast-to-coast “sports walkabout” involving 100 more games and 50 different sports—from major-market events to the smallest of the small. Poignant, irreverent, and ultimately inspiring, It’s Game Time Somewhere chronicles one man’s search for the love of the game.

Alternately blessed and cursed by the notion that everyone should do what they love for a living, Tim Forbes creates and writes about the games that people play.

Tim grew up in the farmlands of northern Connecticut, and went on to earn a bachelor’s degree from Ithaca College—where he played Division III basketball in front of literally tens of people. He received an MBA from the University of Massachusetts, Amherst, and an Associate’s Degree at the Professional Golfers Career College in Temecula, CA. Yes, in that order.

After 15 years spent meandering about in Corporate America, Tim went on to work for three professional golf tours: the Symetra Futures Tour, the LPGA Tour, and the PGA Tour. He also served as general manager for golf clubs in Nashville, Tennessee and Orlando, Florida. In 2009, he founded Outside the Mode, a sports marketing and production company based in his adopted home of Los Angeles.

Tim lives in Redondo Beach, California with a perennially underachieving fish named Halo, a cat, and a wife he fondly calls Bird.


Cards on the table – yours truly is not quite right.

How else could you explain the fact that I spent a year of my life attending and writing about 100 uniquely different sporting events involving 50 separate sports? But that’s what I did, and literally thousands of readers helped me keep score. And when it was done, we all knew more about sports in America than it was thought to be humanly possible. Or at least I did, anyway.

“But why?” you ask. Well here’s my story and I’m sticking to it…

As Bill Cosby once said, I started out as a child. A child inexorably drawn to sports – the organized kind and especially the disorganized kind favored by my circle of friends. Consequently I grew up chasing a ball. It didn’t matter what size or shape, I chased them all. I was fortunate enough to have come of age in a time when kids themselves scheduled their own games and “officiated” them via the kid’s code of sports ethics – an arcane collection of arguments, declarations, and insults that inevitably led to the Do Over. Or somebody taking their ball and going home.

On those occasions when a quorum wasn’t available for even the most streamlined of games, I played them solo. Some might call it “practicing”, but I knew it as “having fun”. And as is the case with many things one repeats endlessly, I managed to develop some level of skill. So it came to be that I went to college on a basketball scholarship.

Annoyingly enough, they don’t let you just major in Basketball – well, not in 1977 anyway, and not in any conference that, like mine, did not start with the word “Big”. So I chose to pursue a degree in Psychology. Don’t ask me why. And when my undergraduate days ended, I decided to obtain an MBA, because, well…because.

The ironic thing was that neither Psychology nor Business Administration would have even been in the race had Sports Management been an academic option. Ubiquitous now, at the time that I entered college there was no such degree program. And so, a career match made in heaven went by the boards…for the time being, anyway.

In my mid-30’s, having acquired over a decade of experience in Corporate America, I became vaguely aware of the fact that people were getting paid to work in sports! Having thus discovered the existence of what was rightfully MY chosen field of work, I spent the next several years alternating between a state of agitation over having been born a decade too early, and thoughtful rumination on how I could still pull off a second half rally and transition to my natural calling.

At the age of 40, the confluence of a certain set of circumstances, not the least of which is the most understanding wife in the cosmos, enabled me to take the plunge. I enrolled in an accredited four semester program that rewarded me upon completion with an Associate’s Degree in Professional Golf Management. I was on my way – a little late out of the gate, but with a full head of steam and ready to use my transferrable skills to claw my way to the top of the sports business.

Nearly a decade later, having come to know quite well the good, the bad and the ugly about pursuing a second career within the sports industry, I was innocently confronted one day with the following question: ”After working in the industry for ten years, do you still love sports?”

Hmmmm…great question. One I honestly didn’t have an answer for. As you can imagine though, it became critically important for me to find one. And thus began germinating the idea of a “sports walkabout” – an effort to reconnect with my ball-chasing, sports-loving roots.

I went to a game. And then another. And another. Big games, little games. Tournaments, matches, meets and bouts. Men’s games, women’s games. Professional. Amateur. High School. College. Games that I was intimately familiar with. Games that I didn’t have the faintest idea as to their rules. 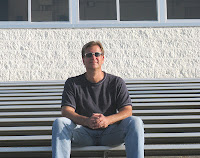 To those that virtually accompanied me I offered to share everything that I found – both positive and…not so positive. I promised to keep it light-hearted, and they in turn agreed to laugh, learn and share the link with others. This blog, this portrait of Americans at play, became a love letter to sports, warts and all. My friends at Google Analytics tell me that it has been read by thousands of people all over the world.

I hope it brings a smile of pleasure and recognition to your face as well. Because it’s always game time somewhere.

To read more of my stories, please visit: http://itsgametimesomewhere.com/the-igts-tour/the-stories/

You can find me here: http://lynnthompsonbooks.blogspot.com/

I found your blog through WLC Chris. Great to connect.