BLURB:
FIVE WOMEN. ONE NIGHT. ONE YEAR TO GET IT RIGHT.


Looking for thrills, practical Sarah signs up to be a schoolteacher on a western movie set and gets more than she’s looking for with cowboy stuntman Kit Stewart, adventure with a capital A. 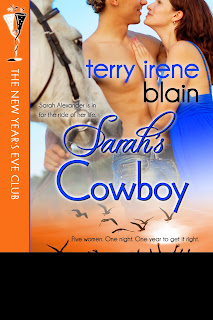 A hand touched Sarah’s arm. “Yes?” she turned and there he was. Kit Stewart, the man who saved her from certain harm her first day on the film set. The man who continued to intrude on her thoughts. At least this time he wasn’t mad.

Darn if his half-smile didn’t make her heart thump just as hard today as almost being run down by galloping horses had that first day.

Still in cowboy garb, he thumbed back his hat in a gesture she’d seen a million times in the movies. “I wanted to say I’m sorry for yelling at you the other day.”

An apology. How gentlemanly. And unexpected. She supposed it was her turn.

His smile got even bigger drawing an answering grin from her.

“I’m Kit, the stunt coordinator.” He held out his hand.

She accepted his gesture, allowed his fingers, warm and just a little rough, to wrap around hers. “I’m Sarah, the school teacher.” She winced, “That sounds so, I don’t know.” She usually wasn’t at such a loss for words. But standing here with a low grade current running from his hand to hers caused her thoughts to scatter on the pine scented breeze.

Wow, her heart kicked up another beat. She could actually feel the sparks flying between them. Were his nerves sizzling like hers? She took a breath and withdrew her hand, hoping to regain her composure. “I accept your apology and I hope you accept mine.”

“Of course.” He smiled then winked at her. “See you around.”

Oh lord, she hoped so. He turned and walked away giving her a view of leather chaps outlining one fine butt.


Terry Irene Blain was lucky enough to grow up in a large Midwestern family with a rich oral tradition. As a child she heard stories of ancestors’ adventures with Indians, wildlife, weather and frontier life in general, so she naturally gravitated to the study of history and completed a BA and MA then taught the subject at the college level. Married to a sailor, now retired, she’s had the chance to live in various parts of the U.S. and has traveled to Hong Kong, Australia, England and Scotland.

Thank you for featuring SARAH'S COWBOY on your site.