STRINGS OF GLASS is the fourth novel in Emily Kimelman's Sydney Rye Series of dark murder mystery novels. This series features a strong female protagonist and her rescue dog, Blue. It is recommended for the 18+ who enjoy some violence, don't mind dirty language, and are up for a dash of sex. Not to mention an awesome, rollicking good mystery!

Sydney Rye is hanging out in India with her boyfriend, Dan, reading paperbacks and sipping beer. No violence and no reminders of her past. But when she and Blue, are attacked by a pact of wild dogs, Sydney starts to feel that old itch again; to do good by being bad.

Trouble finds Rye when she stops the attempted rape and murder of Anita, a reporter working on a story of corruption and human trafficking. The atrocities Anita describes send Sydney, Blue and Dan on a quest that takes them across India after a dangerous and, up until now, untouchable, figure. While Sydney struggles to accept her true nature she realizes that it is the only way to end decades of abuse and exploitation. But Rye fears that she will lose herself, becoming no better than the monster she fights against.


Mulberry laughed. "Come on, what are you doing here?"

"I can see that," he said, then looked around the cabin. I saw his jaw clench and then he asked quietly, "With Dan?" 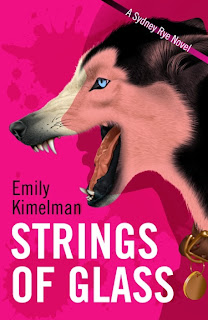 "And that's what you want to do?" He looked over at me again, glints of yellow in his eyes sparkled in the sunlight that streamed through a nearby window.

"You want to stay here, not have any more adventures with me?"

"Your adventures usually involve Bobby Maxim, lies, and almost getting me killed," I said, an edge of anger in my voice.

Mulberry frowned. "What are you going to do?" He stood up and stepped toward me, his broad shoulders blocking out the sun's rays. "Stay here and marry Dan? Become a homemaker?" I felt anger rolling off of him like a wave of heat surges over blacktop in the desert.

His rage struck me like an unexpected blow and I yelled at him. "Why not Mulberry? Why wouldn't I marry Dan? Because that might make me happy. Shouldn't I be happy!"

His face paled and he shrunk away from me. I felt like a bull, huffing air out my nose, ready to charge. He shook his head. "I'm sorry, Sydney. Of course you should be happy." The word seemed to die in his mouth. He ran a hand through his dark hair, the silver that peppered it shining in the light.

I squeezed my eyes shut and rubbed at them with my free hand. "God Mulberry, what are you doing here?"

"I don't know," he said, not looking at me. A moment passed as we stood there, the steam from my shower and heat of our emotions filling the room with a wet and heavy silence. 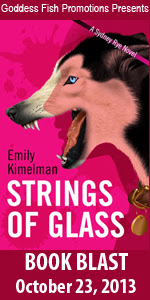 
Emily Kimelman lives on a boat in the Hudson Valley with her husband, Sean and their dog Kinsey (named after Sue Grafton's Kinsey Millhone). Kimelman has a passion for traveling and spends as much time as possible in the pursuit of adventure.

Her "Sydney Rye Series" are dark murder mystery novels which features a strong female protagonist and her rescue dog, Blue. This series is recommended for the 18+ who enjoy some violence, don't mind dirty language, and are up for a dash of sex. Not to mention an awesome, rollicking good mystery! /

The first three books in Kimelman's series, UNLEASHED, DEATH IN THE DARK, and INSATIABLE are available in the Kindle store individually and in a box set. The fourth book in the Sydney Rye series STRINGS OF GLASS is due out Mid-Summer 2013. /

If you've read Emily's work, and enjoyed it, please let Emily know. You can reach her via email ejkimelman@gmail.com 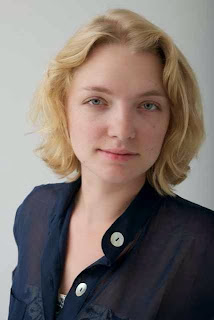 Buy links for all books at Amazon:
http://www.amazon.com/Emily-Kimelman/e/B004YG4PPC/ref=ntt_athr_dp_pel_1

Barnes and Noble:
http://www.barnesandnoble.com/c/emily-kimelman
Posted by Chris Redding at 1:56 AM

Thanks for the excerpt.

Thanks for the excerpt and the chance to win!
Sounds like a really good series!!
natasha_donohoo_8 at hotmail dot com

It sounds like an interesting series.
I found your great blog through the WLC Blog Follows on the World Literary Cafe! Great to connect!