Mystery author Toni L.P. Kelner is under the microscope today. See if she's a plotter or a pantser and how she got the idea for her latest novel.

How long have you been writing? When it comes to fiction, it kind of depends on 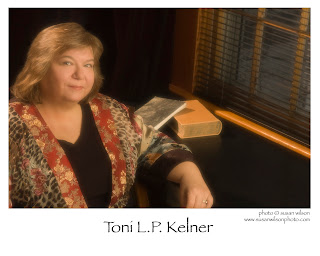 what you count. I did write a "re-telling" of Thumbelina when I was in second grade, but it was a one-shot. It was in junior high school that I started scribbling notes about stories, and I actually finished a few stories in high school. I got my first rejection slips in high school, too.

How did you pick the genre you write in? It chose me. My original plan was to write science fiction and fantasy, and that's what I worked on all through college and for a few years after. Then I started working on a writing exercise from Lawrence Block's book Write for Your Life!, and it seemed to have more personality that most of what I'd written. It excited me. Now the exercise was a character sketch, and I'd created a character who wouldn't work in science fiction or fantasy. So I decided to try to make it a mystery, which I was reading a lot of at that point.

Do you plot or do you write by the seat of your pants? A little of both. Short stories are a bit more planned out, but only in my head. I don't do a formal outline. For novels, I have a setting and a bit of the plot in mind, but mostly it's by the seat of my pants.

What drew you to the subject of Who Killed the Pinup Queen? Bettie Page, or rather, the story of Bettie Page. She was the Queen of the Pinups in the fifties, and she was extremely well known. Then she disappeared. Nobody knew what had happened to her. Nobody much cared at first, either, but she still had a small following. Then, in the 1980s, a comic book artist named Dave Stevens created The Rocketeer, with a character who was based on Bettie. This started to drum up interest again, and people started looking for her and eventually tracked her down. The actual story of her so-called disappearance was pretty mundane, but the theories that cropped up in the meantime were fascinating. I borrowed some of those theories for my book.

What was the name of the first novel you wrote? Did you try to publish it? The first novel I completed was Down Home Murder, and it was published by Kensington in 1993. However the second novel has never seen the light of day. I think I know what it needs to make it publishable, but I just haven't had time to pick it up again. Some day...

What do you consider your strengths in terms of your writing? Characters and ironically, dialog. I say ironic because my hearing is terrible, and I didn't get hearing aids until after I'd been writing for a good while. Maybe it's because I got used to making up dialog to match what random words I did hear!

What authors do you admire? To be complete would require one heck of a long list, but in brief... Charlaine Harris, because she writes books that are deceptively simple and is never afraid to try something new. Dana Cameron, for much the same reasons. Elizabeth Peters, for writing the best adventure I've ever read. J.K. Rowling for such amazing world building. Rex Stout, Dorothy Sayers, and Fredric Brown for bring their times to life, and for their amazing dialog. That's probably enough to start with.

What place that you haven’t visited would you like to go? Egypt. The Ameila Peabody books by Elizabeth Peters books have got me hooked on Egyptology.

Who is your greatest cheerleader? My husband Steve, but he's got stiff competition from our daughters.

What would you like to learn to do that you haven’t? I'd like to be able to ride a horse. In addition to the pinup queen plot in Who Killed the Pinup Queen?, there's a thread about TV cowboys, and they make horseback writing look so easy and so much fun.

AUTHOR BIO
Toni L.P. Kelner multitasks. In mystery, Berkley Prime Crime has just released Who Killed the Pinup Queen?, the second in her "Where are they now?" series. In urban fantasy, she edits anthologies with Charlaine Harris, and their third, Death's Excellent Vacation, is due out in August. In short stories, she has her first noir story coming out in March in Carolyn Haine's anthology Delta Blues. Kelner has won the Agatha Award and a Romantic Times Career Achievement Award, and has been nominated for two other Agathas, four Anthonys, and two Macavitys. She lives north of Boston with author/husband Stephen Kelner, two daughters, and two guinea pigs.
BOOK BLURB
Freelance entertainment reporter Tilda Harper is working on two articles simultaneously-one about a former pinup model and one about an old Western show. But when she discovers the pinup queen brutally murdered, she finds that the two stories may have some disturbing connections.
Posted by Chris Redding at 11:36 PM

Really enjoyed this post! I ordered Toni's book the moment I heard the title...it's terrific, so intriguing. I hadn't heard about the anthologies, they sound wonderful, too.

The book is great! Toni, I particularly liked the information about the photo clubs--that was cool!

Mary, thank you so much. I hope you enjoy it.

And thank you, too, Dana. I recently ran across an article by a guy who'd been in a photo club and encountered Bettie Page there. Would you believe Buck Henry? He's one of the creators of GET SMART and a one-time regular on SATURDAY NIGHT LIVE among other things.