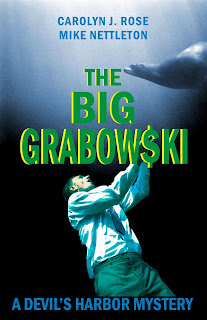 Two authors for the price of one.

The Big Grabowski
By Carolyn J. Rose and Mike Nettleton
From Krill Press, Available through Amazon.com


A whumping sound thickened the southern sky. A Coast Guard chopper appeared over a stand of Douglas firs, tilted, and circled.
“Look!” I pointed over Greg’s shoulder. “They’re signaling for you to stop traffic so they can land on the highway.”
Greg turned. I dodged under the tape and sprinted for the door. It was so easy I almost felt guilty. Almost.
I bolted through the back door, and pounded down the asphalt trail, digging for the telephoto lens. Not that the paper would print a picture of the floater. The Flotsam enforced strict standards about blood, guts, and sensationalism, but I hoped the long lens would give me a clue to the victim’s identity and a jump on 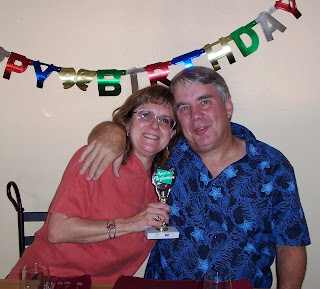 my deadline. Of course, this might be a suicide. That meant no story—and pissing Greg off for nothing.
Stumbling to a stop, I dragged out the camera and snapped on the lens. I heard Greg’s boots thudding on the asphalt as I climbed onto the creaking wooden railing and focused on the body bobbing in the foaming swells below. It floated face down, pink shirt hanging in tatters, gray slacks torn around bruised and broken flesh.
“Damn it, Molly, get off that railing and up to the road or I’ll cuff you.”
“Promise?” I braced myself, squinting. A whiff of week-old-tuna odor drifted up to me. I stifled a gag.
“You know Ben Galloway won’t let you print those pictures.” He grabbed the back of my T-shirt.
“I’m not shooting, I’m looking.” I zoomed and focused. A wave flipped the body and I caught a flash of color, a paisley pattern of pink and purple only one man I knew would put on his feet willingly. “Whoa!”
“What?” He tugged at my shirt. “What is it?”
As another wave rolled the body, I spotted a matching tie. “I feel sorry for you, Greg. You just caught yourself one hell of an investigation.”
“What the hell are you talking about?”
I snapped off three quick shots: the body, sea lion cows huddled on the rocks, and a big bull with an expression of disgust. “Two words. Vincent Grabowski.”
“The developer guy? He’s the floater?”
I climbed down, grinning. “Afraid so.” I packed up my camera. “But look on the bright side. You won’t need to make a list of suspects. You can just copy the Devil’s Harbor phone book.”

When the body of an unscrupulous land developer washes in with the tide, there are more suspects than mourners in the quirky town of Devil ’s Harbor. Vince Grabowski was infamous for creating an environmental disaster, hatching shady investment schemes and trying to commercialize the tiny coastal community. Those on the list of who-could-have-done-it include Grabowski’s less-than grieving widow, her eco-freak boyfriend, a marijuana-farming ice cream shop owner, a radio evangelist about to lose her listeners, the mayor’s sex-crazed wife and a disgruntled artist who grudgingly perpetuates a hoax on gullible tourists.

For Molly Donovan, the murder creates an opportunity to use the crime reporting skills she shelved when her father’s heart attack forced her to return to Oregon . Chafing under the limitations of writing for The North Coast Flotsam, she revels in matching wits with investigators—until the killer frames her father.

Author Bios
Carolyn J. Rose grew up in New York ’s Catskill Mountains, graduated from the University of Arizona , logged two years in Arkansas with Volunteers in Service to America , and spent 25 years as a television news researcher, writer, producer, and assignment editor in Arkansas , New Mexico , Oregon , and Washington . She’s now a writing coach, teacher and founder of the Vancouver Writers’ Mixers. Her hobbies are reading, gardening, and not cooking.

Mike Nettleton grew up in Bandon and Grants Pass , Oregon . A stint at a college station in Ashland led to a multi-state radio odyssey with on-air gigs in Oregon , California , and New Mexico under the air name Mike Phillips. He’s been with KEX in Portland since 1994. His hobbies are golf, pool, Texas held-em poker, and book collecting.

Surf to http://www.deadlyduomysteries.com/ for more information
Posted by Chris Redding at 11:53 PM