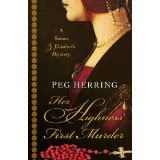 Welcome Peg Herring and her recipe for Spiced Pecans
Recipe: A favorite treat of Tudor era folk and people today, spiced nuts smell wonderful at craft shows and flea markets, but the price can be scary. You won’t believe how easy it is to make them yourself. Go ahead, experiment with different spices, but my favorite is below.
Spiced Pecans
1 pound pecan halves
1 egg white
1 tablespoon water
1 cup sugar
1 teaspoon salt
1 teaspoon cinnamon
Preheat oven to 300 degrees. Beat egg white and water into a froth. In a large zip-bag, combine sugar, salt, and cinnamon. Dip pecans in egg white, then drop them into the bag and shake, coating well with sugar mixture. Place on well-greased cookie sheet and bake for 40 minutes or until egg white is dry. Stir every 10 minutes. Cool on waxed paper. (They freeze well.)
Blurb: Her Highness’ First Murder, Peg Herring, Five Star Mysteries, January, 2010.
In London, several beautiful women are found dead, their heads missing and their blood-soaked copses dressed as nuns. The first victims are prostitutes, but later murders demonstrate that all women face the same peril.
When one of her own ladies becomes a victim, Princess Elizabeth decides to act. To bring the killer to justice she recruits Simon, a crippled young man who sometimes keeps her company; and Hugh, a captain of her fathers’ trusted Welsh Guard. Since the king would be furious if he knew, Elizabeth’s involvement is a secret among the three of them.
Possibilities abound: is it one of the handsome courtiers in Henry’s circle, the unsavory clerk who keeps financial accounts, the madman captured inside the castle gates, or even Elizabeth’s own castellan? As the princess, Simon, and Hugh close in on the depraved killer, he turns his focus on them, weaving them into his plan. He’s clever, cunning, and dangerous, and suddenly, unless all three act quickly, two of them will not survive the chase.

Prize: The names of all who comment on this post or on my website, http://www.pegherring.com/, will go into my U of Michigan cap. The name drawn will receive an autographed advance copy of HER HIGHNESS’ FIRST MURDER.
Posted by Chris Redding at 11:33 PM