Excerpt of SMOKE
Imogene Duckworthy did not like pigs. She was fairly fond of cattle, having grown up surrounded by them. She hadn't been around pigs much. Until now she would never have been driving toward a pig farm. 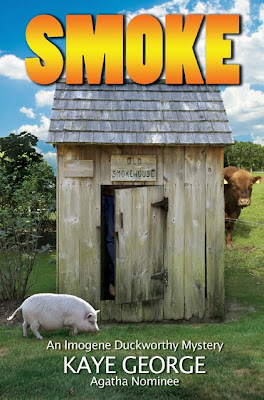 Immy drove the family vehicle, an ancient Dodge van, out of Saltlick, a small Texas town with at least one foot planted firmly in the last century, and down the highway where cattle ranches, thickets of mesquite, and a few old oil wells stretched to the horizon. Cowboy country, not pig country. Not a pig in sight.
Her daughter, Nancy Drew Duckworthy, three-years-old-going-on-four, who was squealing like a pig in her car seat, adored swine. Drew had recently transferred her passion from Barbie dolls to pigs (with a brief interlude of worshipping hippopotamuses--because she liked saying the word). Since Immy loathed the fixation on Barbies, she was trying really hard to like pigs.
In fact, she was on her way to pick one out for Drew's upcoming birthday.
"Pig, pig, pig!" squealed Drew. "I'm getting a big, big pig!"
Immy cringed. Not too big, she hoped.
Ralph Sandoval, who had come along to help handle the animal looked back at the child. "Yes. A big big pig." Immy glanced over and they were both grinning like maniacs.
"They're miniature potbellied pigs, y'all. Not big ones."
Her statement didn't dampen their enthusiasm at all. They kept up a chant of "Big big pig," until she turned the van up the dirt road that led to the pig breeder's place, just outside the neighboring town of Cowtail. The van bumped over the dry dirt, raising even more glee from Drew.
The ancient, bilious green van belonged to Immy's mother, with whom she and Drew lived, and was their only vehicle. But it was a trusty old thing.
Immy would do anything for her daughter, but she wondered if this was the right thing. Her mother thought Drew should have a pig. Drew certainly wanted a pig. But the money to pay for it was making a dent, a ravine--no, a crater in the pile Immy had saved to buy herself a car. A nice, clean, used car that had shiny paint and no rattles. Or maybe less rattles than the van.

Blurb:
Imogene Duckworthy, who yearns to be a PI, has landed a job assisting Mike Mallett in Wymee Falls, Texas. In the course of bring a pot-bellied pig home as a birthday gift for her daughter, Nancy Drew Duckworthy, Immy discovers the body of the owner of Jerry's Jerky hanging in his own smokeroom. The pig breeder, Amy JoBeth, is implicated, Immy feels compelled to try to find the real killer. The gentle, somewhat depressed woman couldn't have killed Rusty Bucket. Could she?
Posted by Chris Redding at 12:20 AM

Thanks for posting this, Chris!