A Bridge to Treachery

From Chapter 23 A Bridge to Treachery - Larry Crane


Lou got to his knees and scrambled under the trailer toward Frawley’s body. He reached across him, for his carbine. Immediately, the police threw another fusillade of fire. Lou was caught in the middle of the searchlight beam. He scrambled back to safety behind the tire as bullets screeched around him, careening off the concrete in a shower of sparks, miraculously failing to ignite the gasoline. By the weight of it, he judged the magazine of the carbine to be almost full. Back toward the center of the bridge, the police cars were creeping forward. Lou crouched behind the front tire of Mack West, gathering his strength for a sprint. He got to his feet and plunged out into the darkness adjacent to the bridge railing. He pumped his legs with all of his strength. He saw the dark form of his drenched jacket in the roadway ahead. 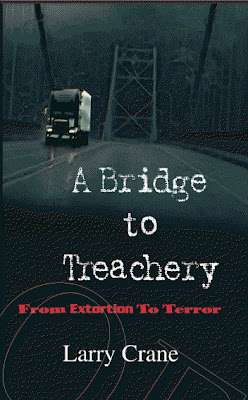 
The headlights of the approaching squad cars created angular shafts of light through the wheels, undercarriage, and stanchions of Mack East and the three-quarter ton full of napalm drums. He dove for his jacket, grasping the machine beneath it in both hands. He whirled the handle once; nothing. Then again, harder. Again. On the third twist, the center of the bridge seemed to heave up in a ball of yellow and crimson flame. A thunderous roar enveloped the bridge and sent shocks through the girders and the concrete surface, throwing Lou to his back.

Globs of thickened aviation gasoline arched through the night--clearing the overhead cables—and then plunged to the inky river below. The massive ball of flame slowly rose off the surface of the roadway and engulfed the cables and lights above.

Lou got to his feet and turned back toward the western end of the bridge, racing back toward Mack West. For nearly a full minute, the center of the bridge was aglow with intense seething light; yet no one fired at him. He went right to the truck, hugging the side of the roadway and the railing. The air in his lungs seemed to swell in his chest until he couldn’t catch his breath. And still no one fired.

Back in the shelter of Mack West, Lou sank to his knees behind the front tire. The entire bridge and the mountains on either side of the Hudson were lit by flaming napalm that now stuck to the overhead cables and slowly dripped in globs of orange flame to the roadway. He’d stopped them. He became aware of the pulsing, rug-beating throb of helicopter blades. He looked out to the north of the bridge and saw a military HU-1B hovering at the level of the roadway, its landing lights gleaming. Red lights flashed on the tail boom. He was receiving no fire. The cops must have been holding off to keep from accidently hitting the chopper or firing into their comrades closing in from the east side.

Slowly the craft moved forward, dipping its nose and gaining altitude. It ascended above the bridge, swinging back to the eastern side. Thirty seconds later, Lou heard throbbing directly overhead. The chopper hovered out in front of him, by the traffic circle, and descended to the ground. There was no firing. It was the perfect time to go.

He reached the end of the railing. Instinctively, he veered to the right, across the narrow strip of grass. He dove headlong into the underbrush, still holding the carbine. He crawled on all fours over roots and rocks and under bushes and low hanging branches that grabbed at his weapon and held him back. He reached the cut.

It was steeper than he thought. He started down the embankment on his rump, warding off boulders and stumps on his way down with his feet, but soon he began tumbling and sliding in a cascade of rocks and water. The pool at the bottom was not deep and it was no colder than the rain.

At first, it was absolutely black in the cut. Gradually his eyes adjusted, but there was no moon and no reflective surfaces to magnify what little light existed. He was shielded from the open ground a hundred and forty feet above him at the level of the bridge. He heard no sound except the splashing of water at his feet and his own deep breathing. The rain still came down steadily, unrelenting. For that he was thankful. It would mask all of his movements. There wasn’t much time. He didn’t know if they’d seen him dart off under the cover and confusion of the helicopter landing. The only thing to do was to strike out west, shielded from view until he was far from this place.

“Hello...” he heard from the other side of the stream. It was a half whisper. “Is it you?”

“Come over here,” he said softly. “Over here. I’m holding out my hand.”

He heard her stumble into the water and stifle a screech. Then his hand was holding hers; pulling her across. She rushed to him, clutched at his shirt, and wrapped her arms around him.


Former Colonel Lou Christopher is an ex-Army Ranger retired from the military and contentedly working as a New York investment broker. After being assigned a number of lucrative accounts and becoming accustomed to living the good life, he discovers there is a pay back. His former military skills are requested under a threat of losing everything he has.

Handed a group of misfits to assemble into a military strike team, he is coerced into leading the team on a mission of domestic terrorism. At the center of a bridge outside of Manhattan, his strike team is caught in the act and unexpectedly becomes engaged in a deadly firefight. It's then that he learns the mission was a political maneuver from the highest levels of the U.S. Government-and ultimately realizes he has been betrayed by his superiors. Learning his team was considered nothing more than collateral damage and intended to be killed and left as scapegoats, he uses his unique military expertise and engages in a fight for his life.

As the strike team is decimated, he and a female teammate elude the opposition forces to survive and escape, turning the tables on his superiors. Using his distinctive set of military skills, he now becomes the hunter and vows to extract his revenge and bring them all down.

Transplanted to Maine mid-westerner Larry Crane brings an Illinois sensibility to his writing. Larry graduated from West Point and served in the Army before starting a business career on Wall Street. His writing includes articles for outdoor magazines, plays, short fiction, and his most recent thriller novel, A Bridge to Treachery. In his spare time, Crane is a hobbyist videographer for his local Public Access Television Station and is a volunteer at his local historical society. Larry and wife Jan live in splendid isolation on the coast of Maine.

Posted by Chris Redding at 2:51 AM

Hello Chris, Thank you for hosting me and A Bridge to Treachery.