I would like to thank Chris for generously hosting me on his blog.
“The louder he talked of his honor, the faster we counted our spoons.” – Ralph Waldo Emerson

I’m fascinated by the concept of honor. One of the reasons I love writing fantasy is the prevalence of themes like honor and nobility and the myriad ways in which different authors explore these ideals.

In Cephrael’s Hand, my character Trell remembers nothing of his previous life prior to waking in the Emir’s palace in Duan’Bai five years ago. Honor is the only thing Trell has had to hold onto in the intervening years, and this shield of honor has become a reflection of his sense of self. His greatest fear is that he once led a dishonorable life, and he suffers beneath this dread because his sense of honor is all he has left.

Trell’s character offers me a chance to explore honor in many forms, yet it’s not only through Trell that we touch upon this theme in Cephrael’s Hand. Indeed, every character faces some test of their integrity—or many of them—as the story unfolds, even as we do in our daily lives.

Honor is a word people often have difficulty defining except by giving examples. As a fantasy author, this fact intrigues me. It makes me wonder if indeed the word can’t be adequately defined without applying it toward an action.

Like good and evil, honor is a word best understood through exploration of our choices and viewpoints. Is it possible that what seems honorable to one man might appear treacherous to another? Or is honor an absolute, looking the same from all sides? Can honor be a curse and dishonorable acts open us to salvation? Or does the violation of one’s honor inevitably turn a twisted path to our own eventual ruin? How do we determine what's honorable when even the noblest of intentions can lead us astray? Good and evil, right and wrong, honor and dishonor…these concepts reflect iridescent shades of gray. How do we define them in an absolute, black and white sense when they depend so heavily on the mores of the group involved to delineate them?

These are the kinds of questions I ask myself, and they're the types of issues my characters also face. I see fantasy as a metaphor for life in this world, and I seek with my novels to create a reality where realistic characters struggle with real problems—problems that anyone might face at some point (though perhaps without such potential life or death outcomes). Honor requires exploration—even in our own lives, it can be a difficult mountain to summit. Tackling such subjects in a fantasy setting allows us to look at difficult concepts far removed from our own daily struggles, giving them a new cast, a different perspective. It allows us to view the world from a distance and learn from (or pass judgment) with impunity. And if we take some lesson from a character’s struggles and apply it to our own lives, all the better.

Being able to explore the many facets of honor as it plays out against a fantastical backdrop is just one of a host of joys in writing (and reading) fantasy.

"All things are composed of patterns..." And within the pattern of the realm of Alorin, three strands must cross: 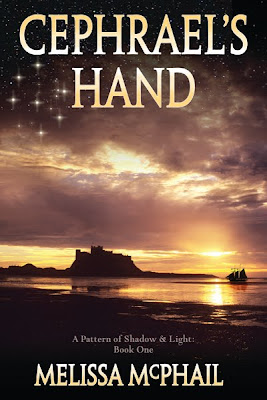 In Alorin...three hundred years after the genocidal Adept Wars, the realm is dying, and the blessed Adept race dies with it. One man holds the secret to reverting this decline: Bjorn van Gelderan, a dangerous and enigmatic man whose shocking betrayal three centuries past earned him a traitor's brand. It is the Adept Vestal Raine D'Lacourte's mission to learn what Bjorn knows in the hope of salvaging his race. But first he'll have to find him...

In the kingdom of Dannym...the young Prince Ean val Lorian faces a tenuous future as the last living heir to the coveted Eagle Throne. When his blood-brother is slain during a failed assassination, Ean embarks on a desperate hunt for the man responsible. Yet his advisors have their own agendas, and his quest for vengeance leads him ever deeper into a sinuous plot masterminded by a mysterious and powerful man, the one they call First Lord...

In the Nadori desert...tormented by the missing pieces of his life, a soldier named Trell heads off to uncover the truth of his shadowed past. But when disaster places him in the debt of Wildlings sworn to the First Lord, Trell begins to suspect a deadlier, darker secret motivating them.

Melissa McPhail is a classically trained pianist, violinist and composer, a Vinyasa yoga instructor, and an avid Fantasy reader. A long-time student of philosophy, she is passionate about the Fantasy genre because of its inherent philosophical explorations."

Ms. McPhail lives in the Pacific Northwest with her husband, their twin daughters and two very large cats. Cephrael's Hand is the multiple award-winning first novel in her series A Pattern of Shadow and Light.