How long have you been writing? I wrote simply for pleasure for years, and in the mid-1980s I started taking classes, initially in play and screen writing. I wrote with the intention of selling at some point, but didn't have a timeframe. I wish I had set one earlier. 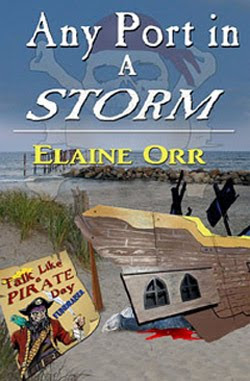 What was the best writing advice someone gave you? The late Davey Marlin Jones was director/movie critic for decades. I took some classes from him at the Writer's Center in Bethesda, MD. It's pretty basic, but one evening when we were peppering him with questions he just looked around the room and said, "You know they call them shows, not tells." Anytime I get too wordy I think about that.
What was the worst? Did you know it at the time? The 'write what you know' business. What I know is boring. Half the fun of writing is picking a setting or subject that you can learn something about as you write, or prepare to write. I didn't know squat for years, so I didn't know it was not the best advice for me.
How did you pick the genre you write in? I think cozy mysteries picked me - though that's not all I do. My mother read all the women mystery writers of her day -- Mary Stewart, Phyllis Whitney, Victoria Holt, some Agatha Christie. Then she'd see an article about how no one had eggs delivered to their door anymore and she'd say something like, "That's too bad. If you were writing a mystery you could deliver messages in the egg cartons." So I guess I was introduced to the genre early.
How many rejections have you received? I could paper a bedroom, or a New York efficiency. These are largely books prior to the Jolie Gentil series. For a long time I kept the rejections, especially any that offered encouragement. At some point I decided that there was something to learn from the process, but it dealt more with publishing than writing. About six years ago I stopped sending anything out, and just wrote what I wanted.
Why did you decide to self-publish some of your fiction? I've published nonfiction with a traditional publisher, and it's neat to work with industry professionals and have someone besides me market my book. Mostly I picked a setting (New Jersey beaches) and developed characters I wanted to work with over time, and I let some of my characters have a sense of humor similar to mine. This is what I'm going to write for now, and I knew the Jolie Gentil series probably would not sell millions of copies, so why might a publisher buy it? If I were 30 I might be willing to shop it around for a good while, but I'm 60, and I didn't feel like waiting. I realize that sounds a bit arrogant, as if I assume a publisher would want the books if I just pushed hard enough. I enjoy what I write, and people do buy the books. Of course, all of this is possible because of e-books and print on demand. I would never have considered loading up my garage with 50 boxes of books and driving across country to sell them.
Do you inject any real-world events in your books? Interesting question, especially now. I had a low-grade hurricane in Any Port in a Storm, and I'm considering using the aftermath of Sandy in a future book. It is a life-changing event for the Jersey shore, and my early thinking is that I would trivialize it by ignoring it.
Who is your greatest cheerleader? Hands down, my sister, Diane. But I'm still mom's favorite daughter. My husband's supportive too, but I've known her longer.
What three things would you want with you on a desert island? Ice cream, ice cream, and chocolate ice cream.


Elaine L. Orr has written fiction and nonfiction for many years and introduced the Jolie Gentil cozy mystery series in 2011. Her fiction varies from cozy mysteries to coming-of-age stories to plays. Her nonfiction includes material on caring for aging parents and carefully researched family history books. Elaine grew up in Maryland and moved to the Midwest in 1994. Any Port in a Storm is the fourth in the Jolie Gentil series.

Jolie Gentil heads the Talk Like a Pirate Day fundraiser for the food pantry and tries to learn who's breaking into the houses she appraises. A newcomer to Ocean Alley is leading high school kids into trouble in those houses. Jolie's mad and lets folks know it. When a corpse turn up under the makeshift pirate ship, Jolie's looking like a suspect. And who wants a murder suspect appraising their house?

Jolie and reporter George Winters try to solve the murder and learn who wants to frame Jolie. Plus, Jolie has to put up with Scoobie's pirate limericks and Aunt Madge's blossoming love life. And what about her own?