A big-box development, an injured husband, and a stalker. Kelly O’Connell has her hands full in Trouble in a Big Box. 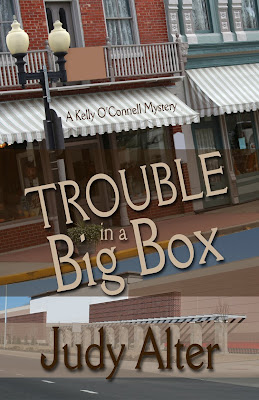 I remember September 2, 2010 clearly. Mike called about eleven and asked if I wanted to meet him for lunch. For him, it would be breakfast. Mike is a patrol police officerand works the late afternoon and evening shift, so he usually gets up around ten in the morning. We agreed to meet at eleven-thirty at the Old Neighborhood Grill, before it got crowded. When I got there, Mike had already secured a booth and ordered. We talked about the girls and their school activities. Maggie was showing promise in ballet, which Mike said would make her walk funny the rest of her life, and Em was taking great pride in her art work, which was probably above average for second grade, not that that’s saying much. And we talked about how our beloved Fairmount neighborhood was getting back to normal after being held hostage to fear of a serial killer who targeted older ladies. We neither one mentioned that my mom and I came close to being the final victims of Ralph Hoskins. There was no need to talk about it.

Mostly, we were happy. We were newly married, young—at least young in heart, since we were both soon headed out of our thirties. But we had become a family with my two daughters, Maggie now ten, and Em, now seven. We were in love, and we were happier than two people have a right to be. Maybe I should have recognized that, but neither of us had any way of knowing that Mike was about to be fighting for first his life and then his mobility, I would be stalked by a vengeful enemy, and a big-box store would threaten our idyllic Fairmount neighborhood. No, for the time, all was peaceful, and I assumed it would stay that way. Foolish optimism on my part. It’s not just being married to a police officer that gets me into trouble. It’s me.

After lunch, we parted—me to go back to my office, O’Connell and Spencer Real Estate, and Mike to get ready for his patrol. He kissed me on the nose and turned toward his car. I simply stood and watched him walk away, thinking what a lucky female I was. I will always remember the way he walked that day, because it would be almost a year before I saw him walk unassisted again, and he never again walked with the same casual self-confidence


Kelly O’Connell has her hands full: her husband Mike Shandy is badly injured in an automobile accident that kills a young girl, developer Tom Lattimore wants to build a big-box grocery store called Wild Things in Kelly’s beloved Fairmount neighborhood, and someone is stalking Kelly. Tom Lattimore pressures her to support the big box, and his pressure turns to threats. Kelly activates a neighborhood coalition to fight the project and tries to find out who is stalking her and why. Mike is both powerless to stop her and physically unable to protect her and his family from Lattimore’s threats or the stalker. After their house is smoke-bombed and Kelly survives an amateur attack on her life, she comes close to an unwanted trip to Mexico from which she might never return.


An award-winning novelist, Judy Alter is the author of three books in the Kelly O’Connell Mysteries series: Skeleton in a Dead Space, No Neighborhood for Old Women, and Trouble in a Big Box. With Murder at the Blue Plate Café, she moves from inner city Fort Worth to small-town East Texas to create a new set of characters in a setting modeled after a restaurant that was for years one of her family’s favorites.

Before turning her attention to mystery, Judy wrote fiction and nonfiction, mostly about women of the American West, for adults and young-adult readers. Her work has been recognized with awards from the Western Writers of America, the Texas Institute of Letters, and the National Cowboy Museum and Hall of Fame. She has been honored with the Owen Wister Award for Lifetime Achievement by WWA and inducted into the Texas Literary Hall of Fame at the Fort Worth Public Library.

Judy is retired after almost 30 years with TCU Press, 20 of them as director. She holds a Ph.D. in English from TCU and is the mother of four grown children and the grandmother of seven.

Posted by Chris Redding at 1:46 AM

I'm reading Trouble in a Big Box now, and I'm thoroughly enjoying it. These are real people Judy writes about, and the situation is true to life when you think about all the towns who fought the big box stores from opening. I love the relationships between the characters and look forward to what happens next. The tension mounts.