The best advice I ever received

The best advice I ever received? Don’t give up. Without perseverance I doubt that any other advice matters because you won’t stick at writing long enough to benefit from it. Most writers develop their craft over time; it takes patience to polish your work, send it out to agents and editors, get feedback, some it negative, and learn from that feedback to make your work better. Writing is not for the faint of heart – rejection can be crushing. I’ve learned that what matters is how you deal with that rejection. There was a point in my writing journey where I considered giving up – not because I didn’t love writing – but because the emotional toll of getting to yes after so many no’s was just too much. In my darkest moments, however, the universe would always find a way to tell me: Don’t give up.

When I began writing I thought talent was everything. If only I could prove I had talent by convincing the right agent, editor, or publisher that my work was worthy of publication I would feel validated as a writer and everything would be O.K. But I quickly learned that the much longed for experience of publication did not transform my life. I still had the same fears, insecurities, and struggles that I’d always had. Even when told I was talented I would focus on the stack of rejection letters that seemed to prove otherwise. What I’ve gradually come to realize is that while I need to keep striving to improve my craft talent isn’t everything. Some of the most beautiful stories ever written have never seen the light of day because the writer gave up. They didn’t posses the necessary perseverance to keep putting their work out there

If you’re anything like me perseverance may not come easily. When I encounter disappointment I’m more likely to feel sad or discouraged than angry. The best way to develop perseverance is to surround yourself with people that inspire you. If you’re a writer you’ve probably already heard of Stephen King’s book On Writing, but just in case you missed it I’m mentioning it here because it’s a book that’s meant a lot to me. I’ve never come across another writer who’s more in love with story in all its forms than Stephen King, and it’s a love that shines through his advice to writers. Whenever I’m feeling low or discouraged I always go back to one of my favorite quotes from On Writing: “Writing isn't about making money, getting famous, getting dates, getting laid, or making friends. In the end, it's about enriching the lives of those who will read your work, and enriching your own life, as well. It's about getting up, getting well, and getting over. Getting happy, okay? Getting happy.” Reading this never fails to remind me why I write in the first place – because I love it – and because I need it. If you feel this way about what you do, no matter what it is, you need to tell yourself don’t give up as often as you need to. Ultimately, the act of creation is its own reward. 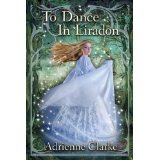 
Seventeen-year-old Brigid O'Flynn is an outcast. A chance encounter with the Faerie Queen left her tainted in the eyes of the villagers, who blame the Faerie for the village’s missing women and children. Desperate to win the village’s acceptance, Brigid agrees to marry her childhood friend: Serious, hardworking, Connell Mackenna. But when Connell disappears before their wedding, Brigid's hopes are shattered. Blamed for her fiancé’s death, Brigid fears she will suffer the same fate as the other village outcasts, the mysterious Willow Women. Lured into Faerie by their inhuman lovers, and cast out weak and broken, the Willow Women spend their lives searching for the way back into Faerie. When Connell suddenly reappears, Brigid is overjoyed, but everything is not as it seems. Consumed by his desire for beauty and celebration, Connell abandons his responsibilities, and Brigid soon finds herself drawn into a passionate, dangerous world of two.

When Brigid discovers the truth behind Connell's transformation she’s forced to choose between two men and two worlds. Brigid’s struggle leads her into glittering, ruthless Faerie, where she must rescue her true love from a terrible sacrifice or lose him forever.

Posted by Chris Redding at 6:27 AM

Thank you for hosting today

Thank you for hosting me today!

I agree don't give up try again. The book sounds fantastic.

I am really glad you didn't give up. This is a fabulous sounding story.

I do think most authors write for the intrinsic rewards rather than the extrinsic.
catherinelee100 at gmail dot com

Perseverance is hard, especially in the face of adversity and I think with today's changing technology and societal trends that the publishing industry will continue to change. I'm hoping things improve for more authors in the process - I would really like to see less rejections and more books being published. Good guest post!

If you give up, there is no possible way you can succeed.