How long have you been writing?


I’ve been writing off and on since I was a child, but I decided to try to become a professional author in 2006. My first book was published in 2010—but not until I’d written three other manuscripts.

Do you plot or do you write by the seat of your pants?


Team Plotter, all the way! I use the writing software Scrivener to organize my ideas and keep plot threads and character details consistent across each series. For me, knowing ahead of time what is supposed to happen helps me to sit down and make it happen. Without a roadmap, I find myself spending too much time staring helplessly at a blank page. (Or catching up on Words With Friends instead of writing!)

What drew you to the subject of The Captain’s Bluestocking Mistress?


I loved the idea of soldier coming home from war and doing his best to return to normal, when normal in his case means Regency England. How would a hero deal with PTSD in a society that values frivolity? And once a heroine is labeled a bluestocking and a wallflower, what lengths could she go to break out of the mold?

How many rejections have you received? 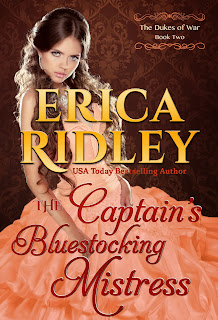 I have no idea! I think I would’ve gone a little crazy if I had kept count. Like many authors, I had dozens of rejections to query letters and requested partials before I landed a literary agent, and the rejections didn’t stop there. My agent spent almost a year trying to shop a book that we both loved but ultimately did not sell. It was the following manuscript that earned me my first contract.

What was the best writing advice someone gave you?


The difference between success and failure is that failures quit.

Tell me one thing about yourself that very few people know.


I live on a macadamia farm in the rainforests of Costa Rica. It’s not a secret, but I doubt many people imagine a historical romance writer lying on a hammock with her laptop as hundreds of wild parrots chirp overhead and howler monkeys call in the distance. I love it here!


Captain Xavier Grey returned from the Napoleonic Wars a hairsbreadth away from catatonic. No one knows what happened but him, and Xavier isn’t saying a word. He flees London for the countryside, intending to spend the rest of his days alone in his small cottage. Jane Downing is a wallflower with a serious book habit and well-honed inner snark. She’s tired of being invisible, and sets out to turn the man of her dreams into her real life lover. She lands on Xavier’s doorstep just in time for the snowstorm of the season. Captain Grey suddenly finds himself snowbound with a bluestocking. And she has an unbelievably tempting plan for heating up the winter nights...

What do you consider your strengths in terms of your writing?


I think that my use of humor and multifaceted characters is something that readers really enjoy. No one is “just” a duke, or “just” a wallflower, and I try to let all the aspects of my characters’ lives and personalities influence the plot and its outcome.

What do you consider your weakness and what strategies do you use to overcome it?


A weakness that I think plagues many writers is that we’re sooo close to our characters and our stories, that sometimes we don’t realize when what’s on the page doesn’t match up with what’s in our head. To me, it might be obvious that the heroine feels a certain way or that the hero had good reasons for doing X. But it takes the honest feedback of trusted critique partners to point out when something is missing—or when it’s been repeated to death and needs to go. My CPs and I like to call it “constructive brutality”. They’re my first line of defense before I send a story off to my agent or my editor, and we count on each other to point out all of the flaws in a way that encourages, rather than demotivates.

What place that you haven’t visited would you like to go?


India is high on my list! I’ve been invited twice by friends who live there, but both times the round trip airfare was cost-prohibitive. I’ll make it there eventually!


Captain Xavier Grey’s body is back amongst the beau monde, but his mind cannot break free from the horrors of war. His friends try to help him find peace. He knows he doesn’t deserve it. Just like he doesn't deserve the attentions of the sultry bluestocking intent on seducing him into bed…

Spinster Jane Downing wants off the shelf and into the arms of a hot-blooded man. Specifically, the dark and dangerous Captain Grey. She may not be destined to be his wife, but nothing will stop her from being his mistress. She could quote classical Greek by the age of four. How hard can it be to learn the language of love? 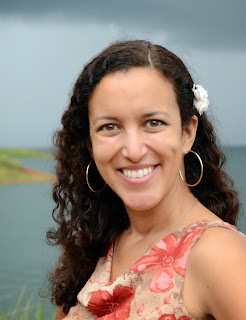 
Erica Ridley learned to read when she was three, which was about the same time she decided to be a writer when she grew up. Now, Erica is a USA Today best-selling author of historical romance novels. Her latest series, The Dukes of War, features roguish peers and dashing war heroes who return from battle only to be thrust into the splendor and madness of Regency England. When not reading or writing romances, Erica can be found riding camels in Africa, ziplining through rainforests in Costa Rica, or getting hopelessly lost in the middle of Budapest.

See http://www.ericaridley.com/extras/ for downloadable headshot and author fact sheet, or email erica@ericaridley.com with any questions, or to schedule an interview.
Posted by Chris Redding at 11:35 AM