Sweeter Than Honey by Delilah Devlin

Something’s on the rise in Two-Mule, Texas. And it ain’t just the temperature.


Cafferty lives a happy, if precarious, existence as a traveling saleswoman. She sells her elixirs and potions while searching for the one thing she hasn’t been able to brew from the back of her colorful wagon—a sense of belonging. She arrives in Two Mule, Texas, with her Elixir of Love, a potion that improves a man’s libido but might just get her run out of town.

Sheriff Joe Tanner is protective of his little town. Downright hostile toward anyone who might take advantage of the fine folk under his protection. Any snake-oil salesman who rolls into town better just keep right on rolling. 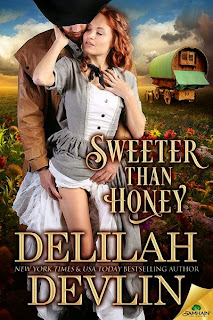 Honey isn’t what Joe expected, from her vibrant red hair and cat-green eyes to her curvy mouth and hips. And when the men of the town begin to plead exhaustion—and place the blame squarely on her sweet-smelling shoulders—Joe has no choice but to launch an investigation. A very, very deep investigation…

Warning: Contains a sheriff who prides himself on keeping his town running as smooth as a well-greased wagon wheel, and a wandering saleswoman who’s more than a bump (and grind) in his road.


“Sheriff, you’ve gotta do somethin’ about that woman.”

The note of exasperation in Curly Hicks’s voice was one Joe Tanner had heard often in the past couple of days—at least from the unmarried men of the town. He didn’t need to ask which woman Curly was talking about. He already knew who was responsible for Curly’s agitation. Her name was on everybody’s lips, although the tones with which her name was spoken varied widely.

He was curious what the normally reticent shopkeeper had to say about the lady in question. “Just what do you want me to do about her, Curly?”

“Send her packin’! She’s up to somethin’. Cain’t tell you ’xactly what, but ever since she came, nothin’s been the same.”

So he wasn’t the only one to notice. Since the day Honey Cafferty’s fancy-painted wagon had rolled into town, the mood around Two Mule had seemed…expectant, like the town itself was wakening from a long slumber and had suddenly discovered every joyful holiday was all wrapped inside one bright, shining moment.

Which posed a dilemma for Joe. Two Mule had elected him to keep the peace and things had been riding smooth like a Conestoga over flat land—no bumps, no bone-jarring thuds. So far, the townsfolk had been pretty satisfied with their lives. It was a quiet place—the right kind of town to set down deep roots—and he intended to keep it that way.

However, Honey Cafferty had a way about her that was anything but quiet. She radiated shimmering sensuality, from her vibrant red hair and cat-like green eyes to her lushly curved lips and body. Everything about her shouted like Fourth of July fireworks and crazily spinning whirligigs, eliciting a restless hunger in him that had no place in his tidy little life.

Just looking at the woman made his teeth ache, made him want to touch the fire he sensed smoldered just below the surface of her sweet-smelling peaches-and-cream skin.

Not what he really wanted to, that was for damn sure. “Has she committed a crime?”

Curly’s cheeks reddened. “You’re not list’nin’ to me. Amos Handy didn’t open his smithy shop ’til half past noon yesterday. That ain’t never happened before.”

“Why do you think Miss Cafferty had something to do with that?”

“Amos’s wife bought a bottle of her special ee-lixir the day before.”

“I’m not sayin’ she did it on purpose, but Letty was sure lookin’ happy when I came to see what was wrong. And you know that woman has the sourest disposition of any female this side of the Mississippi.”

“What about Amos? Did he look like he was sickening?”

“Well, no. But he’s mighty tired, he says. Said he was gonna close his shop for a couple of days—take a vacation. You ever heard such a load of horseshit in all yer born days?”

“Still don’t see where Miss Cafferty fits in with all this.”