A Chat with William Graham

One of my clearest memories of childhood is teaching myself to type when I was around seven, using my mother’s manual Royal typewriter. 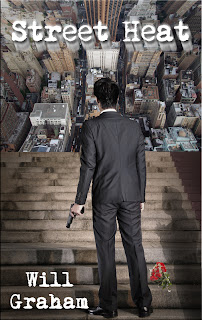 Ever since!  I had some luck in the early 1980’s, tried to make things progress.  I got very very close selling a television series I created, and when that didn’t work out I stopped writing for years.  I’ve been back at it since 2001 or so.

Since 2002, I have been the owner and lead investigator for a licensed firm specializing in computer forensics, and have had the opportunity to work with both State and Federal law enforcement.

Sadly, no, I did not.  While a lot of the technical things in the story are glossed over for the sake of brevity, MONSTERS is solidly based on professional fact and experience.

(laughing)  If memory serves, it was titled THE CASTLE EXECUTIONER, about a haunted castle.  I think I was 13 or so and no, I never tried to get it published.  Around that age, I DID try and sell a short story to “Playboy”; they published John D. MacDonald, they published Ed McBain, they published Ian Fleming…. I really DID read it for the articles!  In retrospect, all I can say is something about the exuberance and confidence of Youth…J

I’m not certain, I don’t believe today’s computers are capable of producing that number…J

Keep it your story.  Always remember, this is YOUR story.

A producer in told me once he was going to try and make this happen without screwing me too badly.  If it worked out, terrific, if not, well, God bless and maybe next time.

I surrendered gracefully and embraced the eBook revolution.  International Thriller Writers accepted my story SPIDER’S TANGO for inclusion in the newest THRILLER 3, due next summer, and that re-ignited the flame for some earlier efforts.

What did you NOT like?  No one is without flaws, and I’m always curious as to what a reader DIDN’T like about my works.  Maybe I can avoid it next time, maybe not, but I am curious.

I collect DVD versions of 1960’s British detective series; THE SAINT, THE BARON, THE PROTECTORS, etc.  Back when a hero was a hero, and that was that.

As mentioned above, I am a licensed computer forensic investigator.  Most of the time, I enjoy my work, but I have learned the hard way the truth of the adage, “Once you see something, you can’t UN-see it.”

I have two currently available; the aforementioned MONSTERS, and a police thriller titled STREET HEAT, very much in the ‘Lethal Weapon’ style of police work.

Depending on workload, I seem to be at my best first thing in the morning.  I’ll just let the keyboard do what it does, then go back and clean things up in the afternoon.

Those who dream by night in the dusty recesses of their minds wake in the day to find that all was vanity; but the dreamers of the day are dangerous men, for they may act their dream with open eyes, and make it possible.
T. E. Lawrence
( of )

The Complete Sherlock Holmes in book form, the James Bond movie series on DVD, and my iPod with an assortment of music.

.  That city has always had a siren’s call to me for no reason I can explain.

One of the best compliments I’ve ever received was from a reader who read MONSTERS, and said I’d handled ‘a terrifying subject with restraint and grace’.  That one I value.

I read.  Obsessively.  Compulsively.  When I gave in and got an iPad, it stuns me to carry an entire library around.

If I have to pick one, it would be my lovely wife.  I’m lucky enough to have a circle of friends who are also writers, and we back each other up all the time.

I’d love to be competent with wood-working.  My father did it as a hobby, and he was remarkable with what he could build.  Give me a picture, a nail, and a hammer, and someone needs to be around to dial 9-1-1.

The last line of actual dialogue in MONSTERS is something I’m proud of.  I don’t mean to tease but, taken in the context of the story, all I can hope for is the reader has the same reaction to it I did. 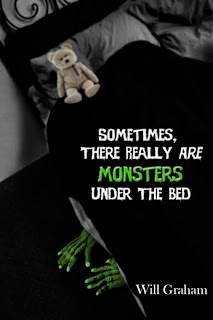 Author Bio:
William Simon publishes under the pseudonym ‘Will Graham’.  His two novels, STREET HEAT and SOMETIMES, THERE REALLY ARE MONSTERS UNDER THE BED are available for both Kindle and Nook.  His website is: www.wmsimon.com
Book Blurb:
STREET HEAT:  A former detective in confronts the serial killer who got away.... and the woman who broke his heart.  (Kindle, Nook)
MONSTERS:  An investigator and his heiress partner find not all monsters are make believe on that most special of days, Christmas Morning.  (Kindle, Nook)
Posted by Chris Redding at 11:56 PM

All great stuff, William. I wish you all the possible success in the world.

Wonderful interview! I loved "Street Heat." It kept me guessing right up till the end. :)

Can't wait to start Monsters Under the Bed! It's fun to hear bits and pieces along the way, but also makes it hard to wait for the book to come out! LOL The last line of actual dialogue in this book is Priceless!!

Wonderful interview! Super questions, Chris. I learned something new about you, Will. ;-)

Thanks, everyone, for your comments, and extra special thanks to Chris for having me here today!

I've read a lot of your pages and I can't say that I didn't enjoy each and everyone of them. Mixed Marriages was fun and dangerous, Street Heat was thrilling, and the new novel is shaping up to be killer...pun intended! Thanks for being a great writer who's willing to share their knowledge and expertise.