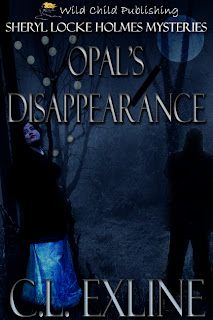 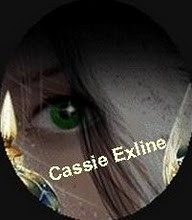 An old college friend begs Sheryl to help find her missing cousin, Opal, who may have been kidnapped by a mysterious mountain man. When all leads are exhausted, Sheryl concocts a dangerous plan—she becomes bait for the kidnapper and alleged murderer.

But will she survive her plan? Or is this Sheryl's last mystery?

“Once I’ve been kidnapped, and I’ve found Opal, I’ll give the code word…come running. I will do my best to leave a trail. I daresay by tomorrow night, this will all be over.  The game’s afoot.”


Buy Link: http://www.wildchildpublishing.com/index.php?main_page=product_info&cPath=83&products_id=362
Posted by Chris Redding at 12:01 AM

Chris, thank you so much for having me.

Cassie, I loved your first two books, can't wait to read this new one. Nice cover.

Great interview. I noticed that each book title used a gemstone. Is there a reason for that or it just happened?

April, that you very much. I'm glad you're enjoying the books. Also under contract is Dragon's Pearl, book four in the series. Plus I'm working on book five -- Curse of Jade's Bluff.

Molly, good eye. The use of a gemstone in the title is for a reason. The gem is also the name of a character. Whether the character lives or dies, I can't say, you'll have to read the books. ;) Thanks for stopping by.

Can the books stand alone or do I need to buy all of them and read in a particular order?

Great question, Spring. I'd love to lie and say you must buy all of them, but each book stands alone. Thanks for visiting.