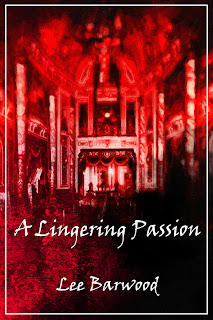 1.         How did you pick the genre you write in?
A:        It’s my favorite genre to read, and years ago, I used to read Gothics in search of stories in which the supernatural wasn’t just explained away at the end of the book. I wanted real otherworldly encounters. That was when the Gothic market was becoming supersaturated, and most of what I read was pretty awful—not to mention that they explained away all the paranormal phenomena. So I decided I could certainly do at least as well, probably better. And that’s how I started. The abundance of good paranormal novels today is like a feast!
2.         Why did you choose a haunted theater as the setting for A Lingering Passion?
A:        Theaters have a wonderful history of superstitions that color an already enticing atmosphere of mystery and drama: beliefs like the danger of peacock feathers, the reason actors say “Break a leg,” the reason they won’t utter the name of Shakespeare’s “Scottish play” in the house, why they won’t whistle in a dressing room. The list is long and has always fascinated me.
Also, I used to cherish dreams of becoming an actress – who hasn’t fantasized about being on stage in some tremendously glamorous performance?— and some of my fondest memories are of being onstage during one amateur production or another. I think we all can relate to playing make-believe and stepping out of ourselves to become someone else for a while; how much more fun is it when it’s wrapped in glamour and fame – and maybe a bit of mystery, as well?
3.         What sort of research did you do?
A:        I found some of the most wonderful books on traveling theater troupes during the nineteenth century, and learned all sorts of things about the realities of life for actors who traveled from one town to another on railroads, in stagecoaches and wagons, even on foot, hoping for a profitable production of one sort or another. Some were little more than traveling thieves, as is the case with the troupe in the opening of the book, but many were truly gifted performers who lived a hard life to follow their dramatic calling.
I also investigated the spa towns of the nineteenth century; I’d actually been to both Eureka Springs and Hot Springs, Arkansas, as well as Saratoga Springs, New York, at various times, and added to what I’d learned on my visits there with research on the history of other towns that grew up around therapeutic springs (or those believed to be therapeutic). Even and Cape May, , were considered “spa” towns by some because of the imputed therapeutic effects of the ocean. So there was a lot of material to draw on.
Last but not least was the research on Ozark superstitions, but that’s been an ongoing project since I began the Haunted Ozarks series of books. Lots of Scots, Irish, English, and American Indian beliefs came together over the centuries to create some really unique folk customs and traditions.
4.         What do you think makes the supernatural so attractive to readers?
A:        I think it’s the great mystery of it. None of us really knows what lies beyond the veil, so to speak, although people who believe they have seen or heard apparitions may believe they know at least a little of what awaits us on the other side. Then there’s the very powerful attraction of being able to rejoin someone we’ve lost – and eventually everyone loses someone close to them. How strong is the need to believe that we will see loved ones again someday – or that they’re really not that far away from us at all?
5.         Who is your favorite character in your book?
A:        Declan, of course. He’s every leading man I’ve ever had a crush on, all rolled into one, but accessible. Although I do like most of my characters, and had great fun making the ones I don’t like deliciously nasty so that I enjoy not liking them.
6.         Phyllida is sensitive to supernatural phenomena, but Declan isn’t, as a rule. Why is he so susceptible to the apparitions in the theater?
A:        I would say that it’s because of his own history of loss. There’s an aura of tragedy around him that resonates with the forces in the theater, making him both receptive to them and vulnerable to their powers.
7.         If you could ask your readers one question, what would it be?
A:        What is it about the paranormal and the supernatural that fascinates you? 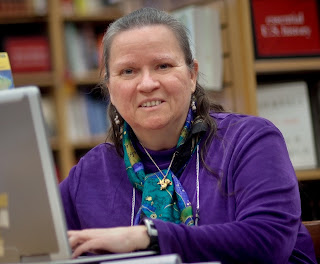 Bio
Gryphon Award winner Lee Barwood often writes about the plights of animals and the environment, with a paranormal edge. Her Haunted Ozarks series is peopled by those whose otherworldly abilities go beyond the physical universe. She finds that mystery and the paranormal fit together perfectly, embracing the unknown and offering clues to more than one puzzle at a time. In A Lingering Passion, a generations-old murder ensnares the whole cast of a revived play in a haunted theater as the dead reach across time to find vengeance—and love. Learn more about her and her work at www.leebarwood.com.
Posted by Chris Redding at 12:35 AM