1.                  How did you pick the genre you write in?
I love romance novels and their happy endings.  It's so much fun watching the hero and heroine falling in love and overcoming obstacles on their way to their happily ever after.  But I also enjoy reading mysteries, where good always triumphs.  So combining my two favorite fiction genres into my "Dr. Ally Skye, Sex Therapist" comic romantic mystery series has been a blast to write.
2.                  What drew you to the subject of Sex & the Single Therapist?
I have a sense of humor that's been described as "offbeat."  ;-)  And the premise of the series appealed to my slightly bent funny bone.  The idea of a female sex therapist/amateur sleuth offers lots of comic possibilities, especially if the homicide detective hero is a "meat-and-potatoes" guy sexually (read "prude"), who's not too keen on the heroine's profession.  Dr. Ally Skye's specialized knowledge, however, proves useful to the police when they're trying to solve sex-driven crimes.  I had a great time writing about these two very different characters who are drawn together by murder and an inconvenient -- put powerful -- attraction. 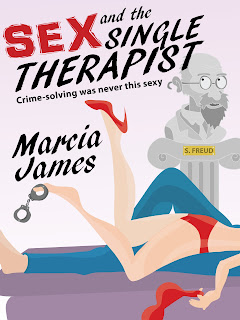 3.                  Did you encounter any obstacles in researching it?
The series is set in , which is known for its widely available legal and illegal sexual activities.  Dr. Ally Skye could solve a sex-related murder a day and probably not run out of different kinky crimes for years.  Researching sex in "" has been interesting, but it's also led me to some pretty disturbing websites.  I'd say the toughest part of the research is the crime scene and forensic procedures.  I don't go into graphic detail about the murders in my books, however.  The series is a comic one that is closer to cozy mysteries than to thrillers...IF cozy mysteries had lots of love scenes in them.  ;-)
4.                  What is the one thing your hero would do that you wouldn’t?
He would attend an autopsy.  I'm so squeamish about blood and such that I don 't even watch TV crime shows -- except for Castle because the gore is kept at a minimum and it stars Nathan Fillion.  Yum!
5.                  What did you enjoy most about writing this book?
I enjoy putting my characters into situations where they are "fish out of water."  In this series, Zack Crawford, the prudish detective hero, is uncomfortable being attracted to a woman he first mistook for a sex trade worker.  As their relationship progresses, he's worried she'll expect more than "vanilla sex."  When she jokingly offers to put an ice cube on his male G-spot, he tells her the only way he'd agree is if his G-spot was on his tongue and the ice was in a glass of Scotch.  He eventually discovers that lovemaking can be playful and even funny.  My heroine has a good time "loosening up" Zack a little.  ;-)
6.                  What was your favorite scene to write?
Zack and Ally's first love scene, although their first kiss scene runs a close second.  I LOVE writing love scenes.  The characters are so emotional and vulnerable that first time especially, and their physical love can often trigger a realization that their hearts are also involved.  Love scenes are a big payoff for romance readers, of which I am one.
7.                  What was the name of the first novel you wrote? Did you try to publish it?
The first novel I completed was a comic romantic mystery titled, Southern Exposure.  It won a contest and was requested in full by Harlequin for the now defunct Temptation line.  The editor held onto the manuscript for two years before rejecting it because they "had just published something too similar to it."  I'm turning that book into a single title.  My second manuscript was a comic romantic suspense titled, At Her Command.  It won six Romance Writers of America contests and ultimately found a home at Ellora's Cave.  At Her Command explores what could happen if the DEA, FBI, and police put operatives undercover at the same sex club -- without bothering to tell each other.  At Her Command is available in trade paperback and e-book, and Ellora's Cave has a great sale going on right now for the e-book (http://www.jasminejade.com/p-4206-at-her-command.aspx).
8.                  Where do you write?
I have a home office where I do the majority of my work on my desktop computer.  The office is filled with too many files, books, and stuffed dogs (because all of my books feature 4-legged characters, particularly Chinese crested hairless dogs).  But the office is still a cozy "writer's cave."  If I go outside on a pretty day -- or when I'm on the road -- I work on my netbook.  And if I'm stuck in a doctor's office waiting room, I write long-hand in a print notebook.
9.                  If you have a day job, what is it?
I'm a freelance marketing consultant, though my fiction writing is my main profession these days.  I've always supported myself by writing -- as an advertising copywriter, a corporate video scriptwriter, a journalist, etc.  I also present author promotion online and in-person workshops.  I'm presenting two workshops at the 2012 RT Book Reviews' "Booklovers" convention.
10.              What do you do when you are not writing?
I'm brainstorming plots and "researching" love scenes with my husband and hero of many years.  ;-) 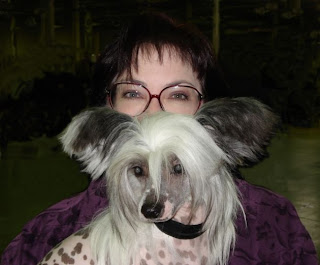 Marcia James writes hot, humorous romances and finaled in eleven Romance Writers of America contests before selling her first romance, At Her Command.  Her short story, "Rescue Me", appears in Tails of Love, a anthology being reissued in December.  In her eclectic career, she has shot submarine training videos, organized celebrity-filled nonprofit events and had her wedding covered by People Magazine.  After years of dealing with such sexy topics as how to install traffic lights, Marcia is enjoying writing happily-ever-after novels.  She lives in with her wonderful husband and her virtual pet, Smokey, a Chinese crested hairless dog.
Sex & the Single Therapist Book Blurb:
A crime of passion…
To clear a friend, sex therapist Ally Skye investigates a patient’s murder. Soon she's trading heated words and hot kisses with a sexy cop. Can this amateur sleuth solve the crime before the killer targets her?
A sexy complication…
Cynical detective Zack Crawford has the murder to solve. He doesn't need a red-hot therapist haunting his dreams. Given Ally's job, she'd probably grade his performance in bed.
A dynamic duo…
Zack and Ally form an uneasy alliance. Murderers, extortionists and psychos are no match for these reluctant partners. Crime-solving was never this sexy or this fun!
Posted by Chris Redding at 12:06 AM

Hi, Chris! Thank you for interviewing me on your blog. ;-)

I look forward to having you as my interview guest on my James Gang website feature in November!