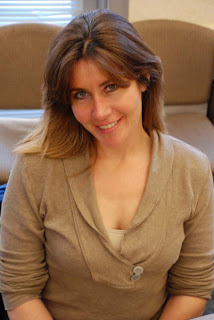 Welcome to Jenny Holbrook.
1. Do you plot or do you write by the seat of your pants?

I am most definitely a plotter. I generally start out with a ‘what if’ question. This gives me a first look at possible conflict. I then develop the protagonist and the antagonist around that core conflict. From there, I can structure the basis for my Inciting Incident, Turning Points (escalating conflict), dark moment, climactic scene and the resolution. The problem I have found with being a plotter though is that my characters tend to be weak and one-dimensional. It doesn’t matter how great my plot is, without character I’ve got nothing to offer my readers. So, what I started doing was using a character chart that I got through Anna DeStefano. We use the chart differently and at different stages of our writing, but it helped me understand how to wrap my internal conflict around my external, really making my characters jump off the page. We’ve been blogging about this process on HoWW, or How We Write Wednesday. Each week we discuss either at her blog or mine, the various methods we use to develop our books through different techniques. So far, I’ve learned I’m still a big plotter.

2. What was the best writing advice someone gave you?

The first time I heard Bob Mayer speak, I was in awe. I remember telling a writer friend that after sitting in his workshop I realized there was hope for me yet. He said some things about narrative structure and what he calls the Kernel Idea that just blew me away. It really made me think about how I was writing. At the time, I was very discouraged with my writing and publishing in general. A year or so later, I was still discouraged, getting rejection after rejection. I had been lucky enough to have a critique done by Bob and over the course of the year, had taken some of his other workshops. He told me that my focus was too much on my bad guy and it was at the expense of my protagonist. He had me really focus on theme for the book and the motivations behind my main character. When I started to that, things really changed.

That was great advice, but the best advice he’s ever given me is to really focus on what my goals are as a writer. To write them down, own them, and then work toward them. This is a tenant of his Warrior Writer Workshop and it has changed my writing career.

3. What was the worst? Did you know it at the time?

There are so many experts out there that it’s hard for new writers to distinguish between what is solid advice from those in the trenches to what is fluff from those regurgitating the real experts. I’m always amazed by how many experts there are out there that haven’t actually done what they are talking about.
The worst advice I ever got was that there is only one way to write a book and get it published. I’m very thankful I didn’t follow that advice.

4. Tell me one thing about yourself that very few people know?

I’m dyslexic and when I’m in a hurry and have to write something down fast by hand, I write from right to left and backward in what is known as mirror image. It totally freaks my family out. My husband says it’s a real talent but doesn’t know what for.

Writing is my day job, but I have taken on another facet to my overall writing career. About a year and a half ago, I started working with Bob Mayer to bring his backlist out in eBook and POD format. I started off by making covers for his books and learning how to convert the files so they could be uploaded to Kindle. We have grown, brining on three other authors and my responsibilities have grown as well. I have become the technical genius behind Who Dares Wins Publishing, managing all uploads, websites and cover design. I have learned more about publishing in this last year than I have in over a decade as a writer.

I have to kind of chuckle at this one because recently Bob was telling me about the schedule he was going to implement to help keep him focused.

I’m a very scheduled and organized person. I have to be. My husband travels and all of my children have played or play travel hockey. Before my daughter went off to play D3 college hockey, we had at least two years of averaging about 160 games a season in at least two countries. My calendar is color-coded and I have a real hard time adjusting when something upsets my carefully planned day.

Every day my schedule is different. I’m big on to-do lists, so at the end of one day, I look at what is going on for the next day and I plan accordingly. I do try to write or do something with my current WIP everyday.

7. What do you do when you are not writing?

8. Who is your greatest cheerleader?

My children. As much as they pick on me because I talk to imaginary friends and spend my free time on twitter talking to strangers, they inspire and encourage every day.

There are a lot of really good writing books out there and I think its good for writers to pick up a variety and check them out to see what resonates with them.

I always have on my desk The Novel Writer’s Toolkit by Bob Mayer, Writing the Breakout Novel by Donald Maas and Stein on Writing by Soul Stein. There are other excellent books such as Stephen King’s On Writing, which I would also recommend.

I have an office in my house. I prefer to write there, but have learned to write anywhere, including the hockey rinks while I’m waiting for practice to be over. For some reason, I get a ton of writing done on airplanes. I really don’t know why that is because I dislike flying so much, but I know when I’m on the plane, I will write about as fast as the plane is going.

Author Bio
Jennifer Holbrook-Talty co-created Who Dares Wins Publishing with NY Times Best-Selling Author Bob Mayer, an independent Publisher and helps run the day-to-day administrative side of the company. She is published in romance under the pen names of Jenni Holbrook and Hollie Brooks. She also teaches Creative Writing at various writing conferences across the country. She is the Rochester’s Writing Examiner for Examiner.com and does freelance editing and technical writing.


Who Dares Wins Publishing was originally created by Bob Mayer and Jennifer Holbrook-Talty as a platform to reissue his extensive backlist, breathing new life into them. With the great success they had with the re-publication of books like the Altantis Series, WDWPUB opened their doors to other authors and their backlist, such as the best selling book Complete Kitten Care. WDWPUB has also opened their doors to new authors in Non-Fiction with books like We Are Not Alone The Writer's Guide to Social Media. WDWPUB will be launching a Write It Forward series dedicated to helping authors achieve their dreams.
Posted by Chris Redding at 11:46 PM

Great post! Didn't know you could do "mirror writing"...kewl beans! I've had to become much more disciplined this year, too, regarding schedule. And I love to-do lists, except when my cat steals the Post-It notes, I'm lost.

And now we're trying to come up with new covers! I thought what Jenny sent me was fantastic for my new Civil War trilogy, but we're getting negative feedback. Sigh. Nothing is easy. So we're going to put the covers on a blog and see what others say.

I admire authors like you who can plot their books out, but I'm not organized enough to even try it. The closest I can come is a cheat sheet with character names and where they live.