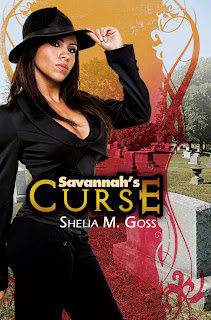 Shelia M Goss is the national best-selling author of eight novels for adults: Savannah's Curse (February 2011), Delilah (January 2011), Hollywood Deception, His Invisible Wife, My Invisible Husband, Roses are thorns, Paige’s Web, Double Platinum and three young adult books: The Lip Gloss Chronicles series: The Ultimate Test, Splitsville, and Paper Thin. Shelia has received many accolades over the years, including being honored as a Literary Diva: The Top 100 Most Admired African American Women in Literature. For more information, visit her website: www.sheliagoss.com or www.facebook.com/sheliagoss.

Straight-laced Savannah Blake’s world is turned upside down when she finds her dad, Major Blake, shot on his lawn. Before he dies, he gives her a few clues to the identity of his killer. His dying request is “Protect your sisters.” Montana and Asia are the only family Savannah has left, and she will fight to the end to save them. The pain of losing their father has Savannah obsessed with finding his killer.

Savannah suspects someone from “The Agency,” a secret government security operation where her father once worked, is behind his death. She enlists the help of Troy Bridges, the owner of a private security firm in Dallas. She doesn’t necessarily trust him, but Savannah needs Troy because of his inside knowledge of The Agency.

The chemistry between Savannah and Troy is electric, and only intensifies as the stakes get higher. They have no time to deal with their unresolved feelings, though, because the closer they get to the killer, the more dangerous things become.

Savannah’s Curse will take you on a roller-coaster ride of suspense as Savannah channels her grief into an unrelenting search for her father’s murderer.

Silence caused her to release her tight grip and look at her father’s face again. She had to know if he was still alive. He had to be alive!

“Savannah, promise me you’ll protect your sisters,” he said before his eyes closed. This time it was for good.

She envisioned Major Blake, her father, rising from the ground and stepping through death’s door. Gone was the bloodstained shirt that adorned his earthly body a long white robe now replaced it.

With Savannah holding his body with one arm, and raising her hand to wave at him with the other, she gave in to the momentary out-of-body experience she found herself in. “Good-bye,” he said, smiling at her before following a tall, handsome man standing beside him. The scene disappeared into the portal of her mind’s eye. She glanced back at the body in her arms.

All her senses were on alert. “Daddy?” she called.

The door opened as the paramedics burst onto the deck. They were late. They were a moment too late.

She could tell people were surrounding the house. That’s when she noticed the Dallas police officers’ uniforms, in addition to the firemen’s and paramedics’. So many uniforms of different types were there. Her eyes fluttered, but she held on to the moment. This was not a time to give in to the mental overload. 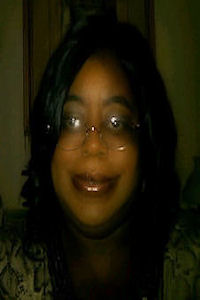 With tears streaming down her face, Savannah kissed her father on his forehead for the last time before those men, with forcefulness and tactless hands, shoved her out of the way. “Excuse me, miss,” one said, noticing her falling back onto the deck with a thud.

As she watched them work, she could only think of their poor timing. They were seconds too late to save the one man in her life who never disappointed her, and who meant the world to her. Major Blake died in her arms, but his legacy would live on.

Soon they, too, would want to know the answers to what she already questioned. Who had killed her father?

But what they didn’t know was that Savannah had made a vow—whoever it was, they would not go unpunished.
Posted by Chris Redding at 7:22 AM