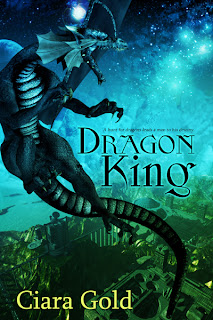 Thank you so much, Chris, for having me here today. The following is from Dragon King, a sci-fi futuristic fantasy romance set to release on April 1.


Back cover blurb: For decades, dragons held the essence of magic that fuelled a wizard’s power, but in 1007 AD, evil claims the heart of one such wizard while another seeks to save the magic.

Tucker Bolen considers himself a renaissance man of the thirty-first century and balks at society’s rigid cultural practices. After purchasing and using a reincarnation reader, he not only connects with his past entities, he also suffers their bid to surface and claim his soul. A collector and explorer, one of the entities leads him on a quest for dragons and a journey that ultimately leads to the greatest magic - love.

Cari Barock fears many things; never finding love, an assassin bent on taking her life, and dragons. When a stranger from a distant planet arrives, she is forced to face all her fears. With her special Deliphit powers, she helps Tucker with his quest, never realizing that she is the key to unveiling his true powers. Will she sacrifice her heart so he can save her world?

“Why you? Why must you put yourself at risk like this?”

“I can’t help who I am or how my skill works.” She sat on the bench and stared at the crowning sun.

“And I can’t help wanting to throttle you.”

“Why are you so angered?”

He stared at her with narrowed eyes. “I’m not sure. Perhaps because I just don’t like the idea of you getting hurt.”

“You have no claim on me. We’re barely friends. Sharing a night of forced companionship does not give you the right to strong emotions where I’m concerned.” She remembered their kiss and wished with all her heart something more could come of their association, but from reading his thoughts, she knew he didn’t believe in lasting relationships. She wanted a lifetime commitment. He wanted a short episode of sexual adventure.

He shook his head, smiling. “Well, circumstances beyond my control say otherwise.” He plopped down beside her.

She drew her brows together. “Meaning?”

“Zan Dane and I have struck a bargain. He’s given you into my safe keeping until we reach Pelicosia at which time things between us will change. I need your help finding the dragons.”

“Nay.” She sprang to her feet and paced. “I won’t be your nursemaid. What you seek isn’t mine to give. Dragons are vicious, nasty creatures. You’ll have to find another guide.” She refused to tell him of her unnatural fear of the creatures. The first time she’d ridden on a dragon’s back, she’d come close to falling. The combined height and speed reinforced her fear, creating a phobia she’d never overcome.

“In return, I’m to keep you safe from a would-be assassin.” He rubbed his chin and acted as if he hadn’t heard a word she said.

“I don’t need protection. I’ll become other people and blend into the crowd where the assassin won’t be able to find me.”

“You’ll lose yourself in the process.”

“My choice to make.”

He grabbed her wrist and tugged, making her fall onto the hard bench beside him. “Not any longer.”

“Let go.” She stared at his hand, feeling nothing but anger for his highhandedness.

“We’re not communicating well.” He released her. “Either we’re having difficulty because of cultural differences or gender differences. Women on my world aren’t as sensitive as you appear to be.”

She rubbed her wrist. “I’m used to a gentler approach.”

“I’ll keep that in mind.” He ran his hand across his face. “I’m not used to dealing with emotions. Since meeting you, I’ve been infused with all sorts of immoral thoughts and confusing moods.”

“I want to kiss you again.”

The blood drained from her head. Pinpricks of sensations settled within her stomach. Why did this alien have the power to elicit lustful urges? “Even as I am? A hideous alien creature?”

To find out more about the Dragon King visit Ciara Gold at:

Chris, thank you so much for posting this. I confess, I forgot in lieu of a death in the family that I've been dealing with today.

Super excerpt, Ciara! Can't wait for this one!!!

Thanks all who came and read the excerpt and thanks again, Chris for posting.