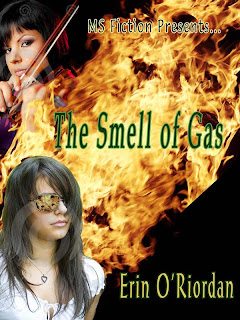 Love pulp fiction? Just try putting down The Smell of Gas. TSOG is full of saints and sinners you'll love to hate. There's Brigid, the high school basketball player and secret heroin addict. Fred, a Catholic lesbian teen, loves Brigid, but doesn't know about her affair with Edward, a married Evangelical preacher. Sex, ethics, religions and mythologies clash as you dig deeper into their connection to the death of a young couple. Coming April 2011 from Melange Books.

Erin O’Riordan writes hot and steamy fiction. Her most recent short story is “Post Op,” appearing in the Evernight Publishing anthology Indecent Encounters. She blogs on all things book at http://www.erinoriordan.blogspot.com.

The cheap candles smoked, filling Fred’s small bedroom with a grayness that reminded her of an underwater scene. She walked over to the bed and lifted the corner of the mattress. She had to grope for a moment to find it, tucked inside the elastic of the blue fitted sheet’s corner. She held up the razor to the candlelight. The blood left on it from the last time didn’t bother her. It was clean blood, her own.

She was tired of cutting her arms. She’d covered her upper arms in intersecting highways of hardened scars, and fresher wounds decorated her arms from the elbow to the wrist. She’d scared herself the other night, cutting a bit too deeply at the wrists. She’d bled until she felt like passing out. The blood had soaked into the pillow; she could still smell its stale odor. She would be more careful this time. 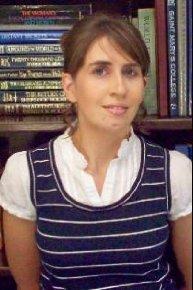 She took off one of her boots and her torn black stockings. Sitting cross-legged on the floor, she reached back and turned on the stereo, tuned to the local Catholic station. The music, a choir of voices singing the prayer of St. Francis of Assisi, lifted her soul. It brought her mind back to her purpose. She would feel pain, not because she got some pleasure from it (though she did), but because needed it to save her soul. If heroin took away all pain, except that nagging longing for more of itself, then the pain must come from somewhere.

She made the first cut just above her knee, curving her wrist to angle the razor down toward the floor. She felt the acute sting over the thin skin there. She made another cut higher up her leg, deep into the flesh of her thigh. Fred grimaced as the blood began to flow freely. She wondered if she’d struck muscle.

The Immaculate Conception of the Escorial looked up to the heavens and pretended not to notice. The choir sang: “Lord make me a means of your peace…”

She sat there, dazed, before she realized that the sharp percussion in her ears was not from the radio station. She dropped the razor unlocked her bedroom door. Leander stood outside.

She could see the beads of sweat on his forehead, under his gently curling black hair. His wide eyes shone. He smelled like gasoline.

Wow...that's some heavy stuff there. I hope the young girl finds help from somewhere...

You'll have to read the book and see. There are all kinds of twists and turns in this one.

The Smell of Gas certainly sounds different. I think I'd like it.

Different and then some (She)! I want to read this. It will be so interesting to see how all the conflicts develop and are resolved; wow! there is quite a bit going on here. I like it ;-)