In this excerpt, it is the night of the family reunion, and Lyris is sitting in the cemetery with her Aunt Wisty, who has somehow escaped from the nearby psychiatric hospital where she has lived for almost seventy years: 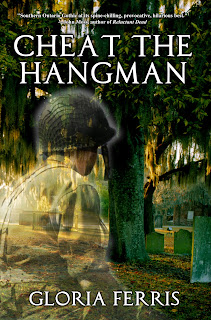 She was staring at her husband's grave again and, much as I didn't want to follow her glance, I couldn't seem to help myself.
What I did not want to see, what I should not have seen, there at the edge of the maples near Thomas's grave, was a shape.  At first, it was just the merest outline, a shadow, but as I watched, it took form until I saw it more clearly than I have ever seen anything before or since.  A man, gaunt and haunted, dressed in the uniform of the last Great Conflict.
His eyes, which I could not have seen in the darkness, were full of longing and hopelessness as he gazed at the thin old woman sitting beside me.  He lifted one emaciated hand towards Aunt Wisty, and his agony was so impelling I could feel its powerful force reaching out to embrace us, pulling us in.
She was looking back at him, and I knew her eyes mirrored the same emotions.  I was gripped by cold fear, knowing I was sitting on a tombstone in the cemetery, but at the same time I was caught between two anguished souls who were trapped in another time.
I tried to detach myself from the overwhelming despair that crackled like a thing alive all around us, and clapped my free hand over my eyes.  Aunt Wisty suddenly cried out and, thankfully, the sound seemed to break the gossamer thread that held us suspended between reality and dreams.  I took my hand away and looked back to the dark tree line.
There was no-one there.  I had seen nothing.  Aunt Wisty slumped silently in my arms, her thin body shivering.  I was shaking as well, and we clung together and let the hot night air warm our bodies. The last notes of the song faded away and I was not sure if I had actually heard the music, or imagined it.
A few minutes later, two attendants from Lychwood appeared on the bricked path leading from the new part of the cemetery.  Aunt Wisty was borne gently away, wrapped in a blanket by a husky young man who whispered kindly to her as he lifted her in his arms.
I followed them quickly through the old cemetery and the new, out the gates to the road.  I returned to the field via the county road.  Nothing in this life could have made me cross the boundary between the cemetery and the field.  Sometimes we see what we do not want or expect to see, real or not, and I had seen enough for one night.
CHEAT THE HANGMAN
Gloria Ferris
Genre: Paranormal Mystery
Pub Date: August 2011
Publisher: Imajin Books
ISBN: 978-1-926997-22-3
ISBN:  978-1-926997-23-0
CHEAT THE HANGMAN
GLORIA FERRIS
After Inheriting Hammersleigh House from her eccentric great-uncle Patrick, Lyris Pembrooke makes a grisly discovery in the tower room of the Georgian-style mansion – the mummified remains of a child.
To uncover the mystery, Lyris is aided by family psychic, Aunt Clematis and Leander, a spirit guide with an attitude, who knows way too much about Winston Churchill and John Lennon. She must juggle a host of more worldly issues, including a new relationship with Blackshore's Chief of Police, confrontations with her controlling ex-husband, hosting this year's family reunion and engaging in a psychological battle with the mansion's butler, while reaching back in time to find out who murdered little Tommy Pembrooke almost seventy years ago.
Gloria Ferris
BIO
I began my writing career by editing and writing operating procedures for Bruce Power, a nuclear power development. Before that, I was a Document Specialist at the same facility. I recently moved back to my native Guelph, Ontario, after spending 20 plus years in several small towns by Lake Huron which inspired the locale for my mysteries. The stories are written in a humorous style, but the crimes are deadly serious.
My paranormal mystery novel, Cheat the Hangman, was shortlisted for the 2009 Crime Writers of Canada Unhanged Arthur Ellis contest. It was published in eBook and trade paperback formats in August and September of 2011 by Imajin Books, and I am working on a sequel, Beneath the Asphalt. 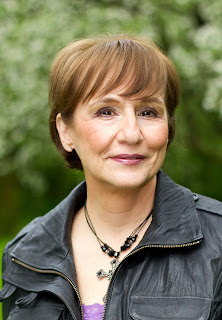 My second mystery, Corpse Flower, went the distance and won the 2010 Unhanged Arthur Ellis Award. The novel is under consideration by two publishers, and the sequel, Murder by Moonflower, is underway.
I placed second with my first short story, Last Roll of the Dice, in the 2011 Bony Pete contest which is sponsored by the Bloody Words Conference and open to CWC members. A departure from my usual first person, humorous style, this story is written in third person from a male perspective, without a hint of humour.
www.gloriaferris.com
www.gloriaferrismysteries.blogspot.com
www.facebook.com/gloriferris
Follow me on Twitter @GloriaFerris