Marja McGraw on Her Writing Process

The Writing Process
I write two series, so I alternate between the series. First, I decide what type of storyline I want. Next I have to mentally find my “voice” for whichever series I’m working on. Then I sit down and write. That sounds really simple.
This is where I laugh hysterically. I love writing. It’s the most fun I’ve ever had while doing a job. However, there’s nothing simple about it. 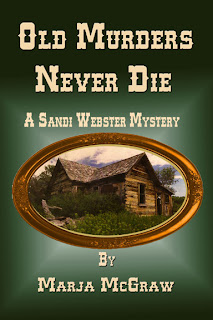 While I’m writing a book belonging to one of the series, I keep my eyes and ears open for story ideas for the other series. I may hear something on the news, or a friend might share something that happened to her or a friend. Sometimes an idea just comes to me. For instance, I’ve always wanted to write a story about a ghost town, and Old Murders Never Die was born.
Once I know what the storyline will be, I begin researching, which is a necessity. It might be ghost towns, or World War II history, or even something as simple as songs or mode of dress for a specific era.
So, armed with ideas and knowledge, I look at timelines. Some stories will evolve over a few days, and some will take a month or more. This is when I pull out a calendar and start making notes. I don’t want to have three days’ worth of action take place in 24 hours.
It’s finally time to sit down and start writing. Can I find a hook? I’d like the story to grab the reader’s attention right from the beginning, but I have to admit this doesn’t always happen. Every once in a while I have to build up to an event.
Okay, so I begin typing. My mind is going ninety miles an hour, but unfortunately my typing isn’t quite as fast. I slow my thoughts down and the story begins to make more sense. It begins to take shape.
I have two friends who critique and proofread my work, and I do the same for theirs. We exchange two chapters at a time, and it works well for us. When they return my chapters I go through and “fix” any problems they’ve found.
I have to admit that by the last couple of chapters, I’m really anxious to finish the book. I’ve read and reread the words so many times that I don’t recognize errors because I know what the story is supposed to say, and that’s how I read it. Thank goodness for friends who actually know what they’re doing. After the last chapter, I go back to the beginning and read the book straight through, repairing and changing as I read.
I’ve made this sound relatively simple, but in reality it isn’t. There are so many smaller steps in between. When my story finally goes to the publisher, it’s as clean and error free as I can make it. And then they find the things I missed and I’m back to “fixing” the story.
Next the marketing and promoting begin, but that’s a whole different subject for another day.
--------
Sandi Webster, private investigator, is in for her greatest adventure when she and her partner, Pete, become stranded in an old ghost town inhabited by a mysterious horse-riding cowboy and some Old West murders. What better way to spend a well-earned vacation than running down old clues and searching vintage houses that haven’t been entered in over a hundred and twenty years? Bubba, Sandi’s half wolf/half Golden retriever, keeps the action moving in his own quirky way, along with a big black horse and the mysterious cowboy.
--------
BIOGRAPHY
Marja McGraw was born and raised in Southern California. While filling the role of a single parent, she worked in both civil and criminal law for 15 years, state transportation for another 17 years, and most recently for a city building department.  She has lived and worked in California, Nevada, Oregon, Alaska and Arizona.
McGraw also wrote a weekly column for a small town newspaper in Northern Nevada, and conducted a Writers’ Support Group in Northern Arizona. A member of Sisters in Crime (SinC), she was also the Editor for the SinC Internet Newsletter for a year and a half. 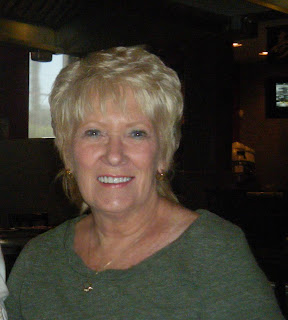 She has appeared on KOLO-TV in Reno, Nevada and KLBC in Laughlin, Nevada, and various radio talk shows.
Marja says that each of her mysteries contains a little humor, a little romance and A Little Murder! Books include A Well-Kept Family Secret, Bubba’s Ghost, Prudy’s Back! and The Bogey Man, all part of the Sandi Webster series. Bogey Nights is due out soon, and this is the first in a new series, The Bogey Mysteries.
She and her husband now live in Arizona, where life is good.
Posted by Chris Redding at 12:04 AM

Hi Chris. Hope the promoting for your new book is going well! Marja, great post on your writing process. I like the critique group doing two chapters at a time. Ours only does one. I also like the photo. Is it new?
Wendy
W.S. Gager on Writing

Finding a hook can be a challenge. I think you do it quite well.

Hi, Wendy, My critique group consists of three of us, and it's all done through emails, so it's pretty easy for us. Yes, new photo taken at a dinner for my husband's birthday. Thanks!

And, Pat, Thank you so much. Every once in a while I drop the ball though. My favorite first line from the books was "Thump!" That's all, just Thump. :)

Chris, Thank you so much for letting me share today. This subject can be more fun than I realized.

You make it sound so organized and controlled. I love it! For me the process is a lot grittier. Revision for me is 90% of the job. It involves lots of stapes and lots of tear drops. Oaths are made. Promises broken. Vases are shattered. But in the end, some times it actually comes together.

Sometimes finding the hook makes me end up starting the story in a whole different spot than I had originally intended, which probably ends up being a good thing.

And I agree with Wendy, the new photo looks great.

Marja, your disciplined legal training shows well in the way that you approach writing novels. I am thinking new writers would really benefit from this post. Writing is work, as you so well illustrate, but it is fun work for those of us who 'must' write.

I get it, William. It's not organized or controlled at all. It sounds so simple when you put the process on paper, but believe me, I understand the oaths, the broken promises and the vases.

Holli, Thanks for stopping in. And thanks for the comment about the picture. Thankfully, it doesn't show all the wrinkles. :) You're right about the hook. It really can almost dictate the book.

Melodie, I'm glad to see you, too. I'm surprised I came across as disciplined. NOT! I let too many things get in my way. But I guess I must be doing something right because I have a new book coming out in February, and I just finished another one. Yes, like you I find it's something I must do, and it's fun anyway.

You open up to discussion something I firmly believe in: the Karma of idea. Have you all noticed when you get a possible plot in your head, suddenly the world seems to throw info your way? Being aware and honed in to this force can enhance your writing. Just let Karma work with you. Okay, I'm a Californian and we do function well with Karma, plus the whole astrology thing works in my favor. Just let the information flow in and put it on the page.

Sunny, Interesting how that happens, and it does. Some of the information comes from the oddest places, but it works for me. Of course, there's still all that research just waiting to be done. Some things just don't want to drop in our laps.

Thanks for stopping in.

LOVED the post, Marja! I sooooo wish I was that organized! Youre my heroine!

Hi, Kari, Thank you so much for stopping in.

As you know, I'm a fiction writer. I guess that carries over into my blog because, as much as I hate to admit it, I'm really not organized. Sometimes I look at what's ahead for me to do on a book and just cringe.

I enjoyed your piece, Marja. I sometimes find when I am researching a topic that it's so interesting that I don't want to stop and begin the writing! I also find that my research can lead the plot in directions I hadn't intended. That can make organization a little hairy, but fun.

Amy, You're absolutely right. The research can turn a whole story around. You just never know where it will lead you. Thank you for stopping in.

The wonder of finding the next story idea, doing research, then following the path as the story unfolds is something I hope most writers treasure. I sure do!

Hook is extremely important in any activity. Knew you were well organized. Look forward to your next novel. Thank you for introducing us to a new Blog.
Jake

Radine, I have to admit that I treasure the whole process. There's something so magical about reading a good book, and knowing firsthand how much work goes into it is the icing on the cake.

Jake, Thank you for your comments, and I'm glad you've found a new blog to enjoy.

I had the opposite problem. I had too much day and not enough action. I totally understand about separating the voices between series.

Thank you for your comments, Stephen. I think what works best for me is to read a little of the last book in a series to find the "voice" again. Truthfully, not every chapter requires a lot of action, but most need something to keep the reader interested.

Have enjoyed your books for some years. Looking forward to more. Share with my friends when finished this encourages their purchase.
Tony

I like hearing about the process other writers go through. It's good to have things in common -great minds and all.