ROWENA THROUGH THE WALL
Chapter 16
Kendra gasped. "How did you do that?"
"Do what?"
"I just saw you walk right through that wall!"
"Oh, that," I said, brushing myself off. "Look, sweetie, not to change the subject, but I don't have a whole lot of time. I―"
"And who is that?"
Kendra gaped at Logan, who stood at least a foot taller than her. He, in turn, gazed down at her as though he'd just discovered the meaning of life, the universe and everything that might possibly be in it.
"Damn," I mumbled. ", this is Kendra. Kendra, Logan. Now that we're all introduced, I really have to hustle."
Kendra's eyes widened. "Is he for real?"
"Yes, yes, he's real," I said, trying to speed things along. "He's a cousin of my fiancé."
Kendra stared at me, mouth open. "He's Ivan's cousin?"
"Not Ivan. Sargon." I sighed. "It's complicated."
She crossed her arms. "I can follow."
As a very curious watched us, I sucked in air. "Okay, here goes. I was married to Ivan the first day I got there, but then I got kidnapped. Gareth's land doesn't recognize the laws of Huel, but if you have sex with the same guy three times in one day in this place, you're considered pledged. So I'm kind of married to Gareth too. Except then Ivan got banished―long story, not nice―and now I'm affianced to the King."
"The King?" Kendra frowned. "You're hitched to two of these bozos and engaged to another?"
"Kind of. It wasn't my fault."
"What is this, 'bozos'?" asked.
I ignored him. But I had an idea.
"Kendra," I said, lowering my voice, "I have to whip home for my vet bag. It would be easier without along. Can you keep him here? I'll only be twenty minutes."
"Sure, but how?" She could hardly take her eyes off .
"I don't know." I said. "Flirt with him or something. But don't let him leave this classroom. Got it?"
She gulped. "Okay."
I ran to the desk and grabbed my car keys. As I reached the exit, I heard Kendra say, "So…is that a broadsword on your belt or are you just glad to see me?"

ROWENA THROUGH THE WALL (No. 2 on Amazon.ca bestseller list, Aug 2011! (fantasy, futuristic)

Do you like comic time travel?
Meet Rowena Revel! 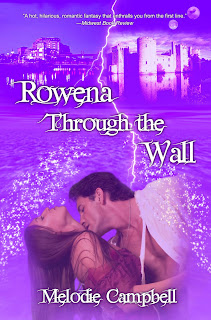 When Rowena falls through her classroom wall into a medieval world, she doesn’t count on being kidnapped – not once, but twice, dammit. Unwanted husbands keep piling up; not only that, she has eighteen-year-old Kendra to look out for, and a war to prevent.  Good thing she can go back through the wall when she needs to…or can she?
“Hot and Hilarious!”  Book Review
“Jack Sparrow meets Stephanie Plum”  Former editor, Distant Suns Fantasy Magazine
Warning:  This book is not a sweet romance.  It is a sexy, funny, rollicking adventure with a spunky heroine and the medieval men of her dreams!  Continues in Book 2.
Rowena Through the Wall (Imajin Books) is available at Amazon.com, Amazon.ca, Amazon.uk, Amazon.de, Smashwords, and Barnes and Noble.
Amazon:   http://www.amazon.com/Rowena-Through-the-Wall-ebook/dp/B00557Z2QU
Smashwords:  http://www.smashwords.com/books/view/65519
Follow Melodie’s comic blog at
http://funnygirlmelodie.blogspot.com/2011_06_01_archive.html
View trailer and read opening scene at
http://www.melodiecampbell.com/ 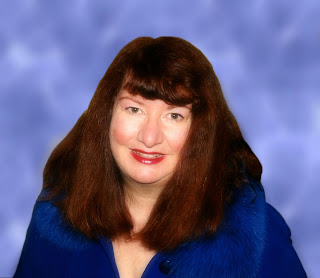 Melodie Campbell got her start as a comedy writer, so it’s no surprise that editors have called her work ‘wacky’ and ‘laugh out loud funny’.  She has over 200 publications, including 100 humor shorts, 30 short stories and one novel.  She has received five awards for fiction, and is the General Manager of Crime Writers of Canada.
Posted by Chris Redding at 12:01 AM

I love that bit. One of the many bits I enjoyed reading and the whole is greater than the sum of it's gags.

If you're reading this... go get Rowena Through the Wall and read that instead! ;-)