The Writing Process by Kaye George

Our Writing Process
I noticed some differences and some similarities in the writing process when ALL THINGS DARK AND DASTARDLY, an anthology I'm included in, was recently published through Dragonfire Press which one of the authors runs. 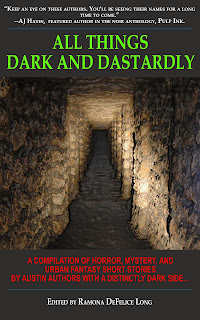 For my own work, I proceed my own pace. I have deadlines, but if they're not set by my publisher, they're self-imposed. For our anthology, we took on some of the duties of a publisher by deciding when we wanted to publish and by making our own schedule. Not knowing how long each stage would take, we set arbitrary deadlines, but ended up meeting them pretty much right on the nose--much to our surprise.
There's editing to do for the professional editors in both cases. Most of the marketing is self-promotion in both cases. But there were other people to coordinate with for every step, for the anthology. Also for the anthology, we chose our own title, text for the cover, got our own blurbs, did our own cover, and are responsible for distribution.
Here's how this whole thing came about. I belong to a writers' group that meets twice a month. We call ourselves All Things Writing. We don't critique each other on an ongoing basis, as my mystery writing group does. Instead, our habit is to spend the first part of the meeting doing a timed writing exercise to a prompt. When the time is up, we can choose to read what we've come up with or not. Since we usually do read our own stuff, we get to know each others' writing styles. This group has dwindled to three faithful members in the last year. Some writers have quit writing, some have acquired jobs that prevent their attendance, but we three keep showing up like faithful musketeers.
I should mention that there is no genre basis for this group. We're just a few people who live in and around and who love to write. The three of us have each achieved our big dream in 2011, publication of a novel. Mine is a mystery (CHOKE), Mary Ann's is dark urban fantasy (NEPHILIM), and Steve's is a unique take on zombies (THE ZOMBIE MONOLOGUES). We've noticed, over time, that we all three like to write dark fiction, usually with some humor thrown in.
So, seeing that our styles somewhat mesh, one day we decided to put some short stories together and see what we came up with. Several of these were the eventual results of our writing exercises. We were pleased with what we put together and had them professionally edited by Ramona DeFelice Long (who really straightened my stories out!). One member, who we had initially thought would contribute, backed out of the group several months ago. That made us a little short on the desired word count, so Mary Ann and I added some reprints to bring us up to snuff.
Steve took charge of the cover and paperback version, I did the ebook versions, Mary Ann got us online, we all helped with the last edits, and we're all helping with the publicity. We're very happy with the result and pleased that people are actually buying it!
If you'd like to try our darkish tales, here's where the book is available:
Amazon paperback, Kindle, Nook, and Smashwords 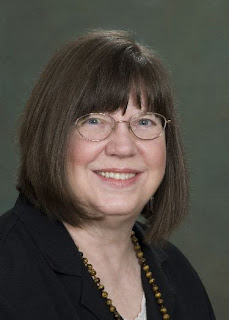 It will also soon be available from Untreed Reads.
http://www.untreedreads.com/
BIO: Kaye George, an Agatha nominated short story writer,
is the author of CHOKE: An Imogene Duckworthy Mystery
(Mainly Murder Press), as well as A PATCHWORK OF
STORIES, a collection of her previously published works,
and THE BAVARIAN KRISP CAPER, (Untreed Reads).
FISH TALES: The Guppy Anthology contains her story,
"The Truck Contest". She serves as President of the
Guppies chapter of Sister in Crime, reviews for "Suspense
Magazine", and writes for several newsletters and blogs.
She, her husband, and a rescued feral cat named Agamemnon
live together in , near .
kayegeorge.com and travelswithkaye.blogspot.com
BLURB: ALL THINGS DARK AND DASTARDLY
A compilation of horror, mystery, and urban fantasy short stories by authors with a distinctly dark side.
Posted by Chris Redding at 12:05 AM