Grad student Savannah Evans is thrilled to be accepted as a resident to a prestigious art colony. Where else would she be able to focus on her craft of writing poetry in a setting like that of the medieval-styled castle? The remote New England island is a respite from her hectic city life. When she meets her benefactor, a mysterious French sculptor, her expectations for carefree days writing near the ocean are distracted by unprofessional fantasies about her sponsor. 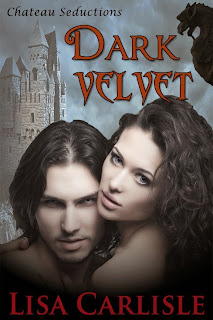 existence that has lost meaning. He’s wandered the earth for decades and finds solace in returning to art. When Savannah applies for a residency, something about her words touches him. After her arrival, a physical attraction grows between them, which he struggles against. She deserves more than someone of his kind.

Antoine proposes they become lovers during her stay. But the situation turns complicated when Savannah discovers his secret. She had suspicions about his identity, but finds the truth overwhelming. Consumed by her desire for Antoine and faced with a tough decision, she is blind to the danger that has arrived at DeRoche Island.

Savannah’s fingers traced the cool marble of the god’s muscular back and then the definition in his arm as he drew an arrow to shoot. She pictured Antoine bent over the sculpture, brows furrowed in concentration, losing sense of time as he polished each portion to perfection.

“Do you like this?” A deep voice whispering in her ear startled her.

She jumped at the sound of his voice, bumping back into his hard chest, and he caught her upper arms to steady her. Only one man in the castle spoke in that smooth French accent—the sculptor himself.

“Oh, I’m sorry, Antoine.” She fumbled taking a half step forward, away from him. “I shouldn’t have touched it.”

“No, don’t apologize.” He let go of her arms, but his warm breath tickled her ear.

He took her hand, caressing her palm, which sent tingles up her arm. Her bottom lip quivered as he brought her fingers to rest again on the marble piece. She thanked the gods he remained behind her so he couldn’t witness her nervous reaction, and she bit her lip to halt the tremors. This was not the way for a young protégée to behave in front of her benefactor. He owned the castle, created the art colony here where she was attending on a poetry scholarship—she shouldn’t go gaga simply from his touch. Which was exactly what she was doing.

“It pleases me that you appreciate my work.” Leading her fingers down the figure’s chiseled chest, he leaned in closer and added, “I liked watching you admire it.”

His voice alone sent flames rippling through her. Every nerve in her being lit with awareness in reaction to him. In the months since they’d met, they’d never been alone in such proximity. Weeks of heated looks from afar had inflamed her desire so the slightest touch became intimate, strengthening her need for more.

Sounds of approaching voices indicated this evening’s performance in the chateau would soon begin. Several of the musicians in the art colony had collaborated on orchestral pieces they wanted to play in front of an audience for the first time. As fellow artists in residence, they sought the support of fellow residents.

Antoine kissed her hand like a suitor in a bygone era. “I hope you enjoy the concert, Savannah.”

Her lips parted, opening and closing like a fish while she thought of what to say. When she mustered up the courage to turn and face him, he had already left the room, filling her with both relief and disappointment. Unaware she’d been holding her breath, she exhaled deeply.

“Dark Velvet has a dark eroticism that makes you want to be Savannah. It is a book that is a good, quick and darkly thrilling read.”

“…insanely hot chemistry between the female protagonist Savannah & vampire Antoine. Their intensity starts off right away and you’re not a chapter in before it takes off like a rocket!”

“Sexy, dark, full of intrigue, art, and paranormal sexiness, Dark Velvet has it all in one hot package!”

“An Enchanting Story, as rich and sexy as Dark Velvet - This is a seductive Gothic tale that will draw you in from the first page.”

Posted by Chris Redding at 2:21 AM