Christian dug out his access pass from his back pocket and swiped it. The secured glass door unlocked, and he held it open for her. His gaze rolled over her body dimensions. Crap. He had it bad.

Destiny followed a tiled hallway that led to the main entrance and elevators. Framed tropical artwork adorned the walls. Two mauve, upholstered high-back chairs, a floor lamp, and a small glass accent table made the lobby homey. Usually people were in and out, but right now they were alone. Christian reached for the elevator button at the same time Destiny did. His finger mashed hers.

She looked at him and grinned. “Did you do that on purpose?”

“Nope,” he said, showing both hands. But damn, he liked the contact.

Her mouth quirked. “What floor do you live on?”

“Eleventh,” he said, puzzled. “Are we going to my place or yours?” 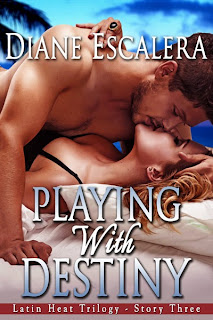 “Let’s go to yours first.” Her gaze swept him from head to toe. “I want to make sure you’re who you say you are.”

No problem. He had nothing to hide. And he didn’t feel insulted either. The elevator bell chimed and the door slid open. A young good-looking guy sprung out. He nodded at Christian, and gave Destiny a brazen once-over. Christian could’ve popped the jerk.

Ladies first, Christian indicated to Destiny when the path had cleared. They stepped into the elevator, and he pressed number eleven on the panel. The door swooshed closed and soft instrumental music came on. They looked at each other and laughed.

“Don’t take it the wrong way, okay?” she asked, watching him.

He shrugged. “Hey, you can’t be too careful.” Obviously, she’d been spooked by the ex. Bastard had left her paranoid. It made his temper flare, but he didn’t want to think about that right now.

“It’s just that the last guy I trusted...” She looked down and her forehead crinkled.

He lifted her chin with his fingers, forcing her to look at him. “If it’s any consolation, I’m more afraid of you.”

Her eyes widened. “Why?”

“Do you have any idea how gorgeous you are?” His finger brushed her soft cheek. “Not that it makes it okay, but I could understand why a guy would lose his mind.”

She smiled. “I think his issues had little to do with me.”

The two of them alone.

Perfect time for a kiss.

But he held back. “Whatever his problem, it’s not yours anymore.” They stared each other down, her light eyes never wavering from his dark ones.

Her teeth dug into her bottom lip. “No,” she agreed, grasping his upper arm.

He palmed her lower back, drew her body close to his. Destiny wanted him to kiss her. He saw it in her eyes.


Fate brought them together. Will Destiny keep them apart?

Destiny Quinn lives for her job. She loves being an IT Recruiter, traveling nationwide. But all work and no play has left her feeling restless. It's been a year since she's gone out on a date — or slept with a man. Suddenly, Destiny can't think about anything else. She's not looking for a relationship, just a good time and a sexy diversion. One steamy night of mind-blowing pleasure, then maybe she can get back to business.

Christian LaCosta wants to prove to his family — and himself — that he is relationship material. Lately, it seems like everyone around him is in love. Maybe it's time to give up the fast life and fast women, quit being the odd man out. Christian decides to take the plunge and join an online dating service. When he's unwittingly hooked up with a luscious neighbor named Destiny, the coincidence is too much. Christian doesn't believe in fate, but one look at Destiny, and he's seeing a whole new future. Now he must convince this career-driven beauty that work isn't everything. Take a chance on them, and she can have it all.


Born and raised in the Bronx, NY, Diane Escalera makes her home in coastal North Carolina. The sultry surroundings are a steady source of inspiration for her hot love stories. Diane is married, has two children and a super cute dachshund she can’t get enough of. She writes contemporary romance and is published with Kensington Publishing and Lyrical Press.

Posted by Chris Redding at 1:44 AM

Thank you so much for letting me share Playing With Destiny!