Taming Icarus In the alternative world of New Furor, there are the rubes and the Spectrum Wielders, gifted men and women capable of wielding great magic with jewels. Chris Skinner, Icarus, unfortunately belongs to a Spectrum class born and bred for service. She also belongs to an abusive Spectrum Wielder who would do anything to avenge her dead sister, even if it destroys Chris and herself in the process. 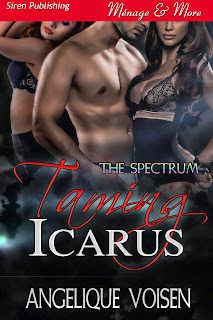 Chris’ owner leaves a reckless trail of vengeance, triggering a confrontation with two of the city’s powerful enforcers. Gus Terrel and Iris Donovan are unlike any Spectrum Wielders Chris has ever met. They only have one interest, and its not taking Chris’s owner into custody. They want Chris badly, but Chris distrusts their intentions. Why anyone would want second-hand property is beyond her. Acquiring their third is harder than Gus and Iris ever imagined, but they would do whatever it takes to make Chris exclusively theirs…no matter the cost.


Without the annoying obstruction of fabric, her body was even more aware of Iris’s confident and roaming hands. Hands that were usually so gentle had become firm and heavy, hell-bent on exploring every inch of her. Iris’s own powerful, domineering violet energy mingled with every press, imprinting itself on Chris and making her skin tingle as every inch of her roused. Mine, Iris’s hands seemed to whisper. Mine.

Chris shuddered. She could voice no resistance. Every part of her agreed with those hands.

It was a slow and terrible tease, and it was becoming very hard for Chris to concentrate, especially with Iris looking at her intently and watching her every reaction.

“I want you to look at something, Chris,” Iris spoke, but Chris could barely follow her words.

She was still dazed from the kiss and from her tormented body. What she wanted was for the other woman to continue. To fondle her breasts, maybe slip in between her legs. Hell, her underwear was soaked by now.

Iris looked amused. Her hand grasped Chris’s hair and directed Chris’s attention to another direction. Gus now stood in front of them. Chris helplessly looked up his still slick body at the hard muscles of his chest.

Her eyes then widened. She didn’t realize he had a tattoo of his own. The intricate scales of a serpent curled over his left shoulder and coiled around his waist. Around it bloomed delicate, small flowers. The flowers reminded Chris of the storm of violet petals of Iris’s assault spell. Were the flowers a reminder of his partner?

But it was not his chest that Iris was pointing at. It was his hard and fully erect cock. The towel that covered his waist was nowhere in sight.

When he saw Chris looking at it, he smiled. “You want this in you, Familiar?” he asked bluntly.

To tell the truth, Chris didn’t really have many positive sexual experiences. Sex was an add-on, a quick distraction whenever her previous owners were bored. It never used to mean anything. Until now.

She wondered if it was her own desire that made her nod in agreement, or if it was also amplified by Iris’s desire as well. The three of them were inextricably bound now, bound in an indescribable and profound way than she had never had with her other keepers, and it was about time Chris stopped running.

In the day world, Angel writes for a trade magazine. She is a recovering red bull addict, an alt rock fan, a keto advocate and currently lives in Singapore. You can contact Angel at angelvoisen@yahoo.com or visit her blog at www.angelvoisen.blogspot.com.

Hi Chris, thank you for hosting me on your blog.