Anonymous letters are always a cliché. In South Africa, they can also be deadly.

This one would contain no explosives or wires. Just a plain envelope and a photocopy of words cut out from newspapers. 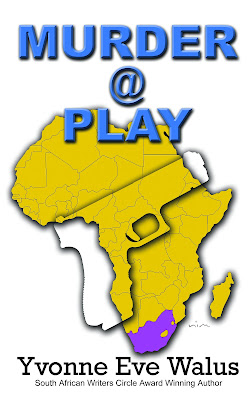 Five. One for every guy at the Election Day after-party.

Or perhaps only four?

Yes, that would be truly brilliant. Only four.

"Every marriage needs a glaze of mystery," her husband had said last night. "Even ours could do with a secret or three."

Christine Chamberlain thought theirs could do without.

Whoever said jealousy was green, must have been colour-blind. Black. That was the colour. The pink and yellow sunrise was black, the sound of birds pecking at the apricot tree outside was black, and black was the smell of warm dusty soil. African black was the new, well, black.

Although, in the New South Africa, perhaps it was not politically correct to think that way. Perhaps she should stick to green. Green jealous thoughts, green sunrise, green birdsong, green smell of parched soil…yeah, right.

Christine's gaze shifted to Tom. They had fallen asleep together, as usual, entwined like lovers. This morning they woke up apart. As usual.

She ran her bath on the cool side of tepid. It was going to be another scorching South African summer day.

Reclining in the water, Christine made a mental list of the weekend tasks.

Is that how much fun other married couples had every Saturday?

Tom's broad-shouldered form, clad in a summer bathrobe for decency's sake in case the neighbours developed x-ray vision, appeared in the bathroom door. His 'hi' was automatic, his kiss programmed into his subconscious routine.

He placed the envelopes on the edge of the tub and busied himself with the comb.

Yep, this was exactly how much fun married couples usually had on Saturday mornings. A naked wife and a semi-naked husband, in the bathroom together, gelling their hair and reading the previous day's post. 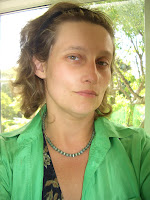 Blurb: EVERY MARRIAGE NEEDS A TOUCH OF MYSTERY. OR DOES IT?


In the new free South Africa of 1994, men are still boss, women carry handguns for self-protection, and some mistakes can change your life forever.


When a body is found during their weekend away with friends, Christine Chamberlain must use her brilliant mathematical mind to prove her husband's innocence...

When it comes to your loved ones, is it possible to know too much?


Yvonne Eve Walus, a novelist and poet, is a member of the X generation. Born in the communist Poland, she grew up in the apartheid-time South Africa and now lives in New Zealand with her family.

Although writing has always been a big part of her identity, Yvonne obtained a PhD in Mathematics and currently works for an innovative education company as a project manager, business analyst and general trouble-shooter.

Her books, MURDER @ PLAY and MURDER @ WORK, are set in South Africa and published in USA by Echelon Press.

Posted by Chris Redding at 4:21 AM