The lock yielded in less than five seconds. He picked up the metal container, slipped inside and eased the door closed. He stood motionless, his eyes adjusting to the darkness, his ears searching for any sound that might indicate danger. He smirked. I am the danger.

Faint light filtered through the dark windows on one side of the building. He shifted his stance and his shoe scraped the floor. His head jerked, startled by how loud it seemed in the complete silence that engulfed him. He held his breath, straining to see or hear anything he might have disturbed.

The quiet and darkness remained unchanged. Too bad for anyone who came in now. The church would burn tonight. It would crash down into ashes. Crash to ashes. He liked the sound of that.


Bad break, building. Not your fault. But it’s gotta happen.

His eyes had adjusted to the minimal light. Shapes and features of the building came into focus. He could make out the pews, gauge the length of the aisle, and see the pulpit.

Time to get to work, take care of business.

He walked deeper into the darkness, stepping carefully, trying to make as little noise as possible. About halfway down the aisle, he stopped and unscrewed the top from the container he carried. He began splashing the pungent liquid on the floor, as he backed toward the door he entered. 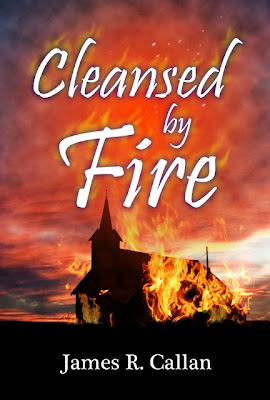 When he finished, he screwed the lid back on, and set the can on the floor near the entrance. Carefully, he cracked the door and peered out, scanning the area, making sure no one had driven up. All clear. He eased the door closed.


He pulled a piece of paper out of his pocket, rolled it into a thin tube about the size of a drinking straw, then gave it a twist in the middle to hold it together. He fished a match from his shirt pocket, struck it and lit the paper.

For a moment, he watched the flame crawl along the napkin, creating shadows that danced on the floor. When most of the paper tube was aflame, he tossed it on the floor a few feet in front of him. With amazing speed, the diesel caught and exploded to life.


He stepped back and watched as the fire spread, his eyes reflecting the growing flames. Satisfied, he grabbed the can, ducked out the door, pushing it shut.

Already, the windows were glowing. 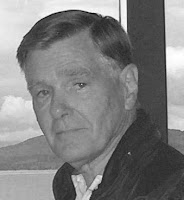 James R. Callan took a degree in English, intent on writing. He went to graduate school in mathematics to support a family and mathematics became a thirty-year detour from writing. He has received grants from the National Science Foundation, NASA, and the Data Processing Management Association. He has been listed in Who’s Who in Computer Science, and Two Thousand Notable Americans.

But writing was his first love. He has published a number of books, both fiction and non-fiction, and picked up several awards along the way. Cleansed by Fire, 2012, is the first of the Father Frank mysteries. Murder a Cappella, a Sweet Adelines Mystery, was released in April by Wayside Press. Callan wrote this mystery with one of his daughters, Diane Bailey, a well published YA author.

Callan lives with his wife in east Texas and Puerto Vallarta. They have four grown children and six grand children.


Churches are burning and a man is murdered, plunging a small Texas town into a state of fear. Father Frank DeLuca, pastor of Prince of Peace Church, is thrust into an impossible dilemma when he hears that another church will be burned. But the disturbing information comes to him via the confessional, and church law forbids him from telling anyone—even the police.


He doesn’t know which church, when, or by whom. Still, he can’t sit idly by, and no law prevents him from looking into the matter himself. The crimes have set the town’s residents on edge, fraying the bonds of trust. Is the mysterious newcomer with ties to the drug scene involved? What about the man who says maybe the churches deserved to burn? Or the school drop-out into alcohol and drugs who attacks the priest with a knife?

Countering this are a young widow whose mission is to make others shine, and a youth choir determined to help those whose churches have been destroyed by the arsonist.


In paperback and Kindle editions on Amazon.com at: http://amzn.to/N30jjf

Posted by Chris Redding at 1:03 AM